If you have ever looked for work, or if you are looking now, you have probably heard about job fairs – or career fairs, job expos, and hiring fairs, as they’re also called. Despite their festive names, these are more likely to be business-like events than raucous get-togethers. With tables of exhibitors representing their companies, and swarms of resume-toting job seekers circling the room, the atmosphere can veer toward the serious. It’s a good kind of serious, though, as people meet each other and get their questions answered. 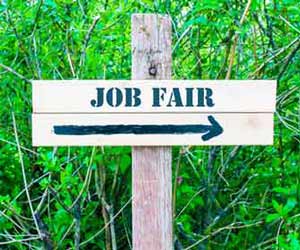 Whatever name they go by, job fairs all perform essentially the same function: to connect job seekers with employers. Of course, being connected and being employed are very different things – a distinction of some importance when choosing which event to attend. By design, some events are meant as opportunities to learn about different careers and companies, while others are explicit in promising that their exhibitors will have jobs to fill.

Your first step in preparing to attend a job fair is to determine which kind it is. From there, you will be able to decide your goals for attending and choose your strategy for talking to hiring managers at the fair.

Here is a quick look at the different types of events that may carry the name “job fair” or its equivalent.

Career Exploration Fair. These gatherings are likely to include a mixture of companies, colleges, trade schools, temporary agencies and even labor unions or military recruiters. The purpose of the fair is to introduce participants to a variety of work and training options, while giving exhibitors a fresh group of potential recruits. Some may have current job openings, but most will be there to provide information. Be sure to check out extra job fair seminars and if possible have your resume reviewed too.

Single Topic Fairs. Depending on the market or particular labor shortages in any given area, you might see fairs that are more narrow in scope.
For example, fairs targeted to veterans leaving military service have become common, while a few years ago, there were frequent events designed to encourage women to consider jobs in the trades. Likewise, you might see a franchise fair, focused on franchise business opportunities and multi-level marketing operations, or a science fair, aimed at connecting people in the sciences with jobs in their fields. These fairs tend to offer a mixture of job openings and general information, again depending on the market at the time.

Single Employer Fairs. Just as a fair can have several exhibitors focused on one topic, so can it have one exhibitor with several types of jobs available. Traditionally, only large employers have used this tool, since they have numerous departments and branches, with a variety of positions in each. These are definitely recruiting situations, with personnel or other department managers on the lookout for the talent they need.

College Fairs. You might see this name given to two very different events, so stay alert. One type of college fair features a number of different colleges, all interested in recruiting new students. The other type is typically hosted on a college campus for the benefit of current juniors and seniors and it features regional and even national employers who are scouting for talent. While the first type of college fair is definitely open to the public, the second may require a student ID to attend.

Online Job Fair. A relatively new entrant to the world of job fairs is the online version. Like its exhibit-hall cousins, the virtual job fair can have many variations. Most, however, are focused on providing job leads directly from an employer to prospective workers. More information about online fairs will appear later in this section. Obviously, dressing for an interview is not something you’ll worry about in this format!

General Admittance Job Fairs. As a rule, these are the events most people think of when they think “job fair.” A typical fair will be held in an exhibit hall or community center and will feature 30 or more companies, as well as extra events such as job search seminars. They are usually one day in length, although some stretch longer, and they are nearly always free to the job seekers.

Exhibitors, on the other hand, will generally be asked to rent their space at the fair, for fees that range from $50 for the afternoon to several thousand dollars. As you might guess, the fees themselves will depend on who’s hosting the fair and how many costs they need to defray.

For-profit companies that run job fairs as their primary business will charge the most to exhibitors, but often offer the broadest advertising to attract the most job seekers. Fairs are also hosted by churches and synagogues, 501c3 nonprofit organizations, workforce centers and other groups whose primary goal is to assist job seekers.

Of course, as a person attending the fair, you don’t need to know too much about what is happening behind the curtain. Whether an exhibitor has paid to attend is not nearly as important to you as the location and type of fair. To find fairs in your area, check the careers sections of your local newspapers. Or, to learn of fairs both locally and far-flung, head to the web.