Everyone wants their resume and job application to shine so that it wins them a job interview and ultimately a job. To do this, people have a tendency to lie, or at least embellish the truth, on their resume. It’s shocking that it happens, but it happens daily. 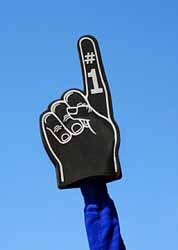 Lying on resumes is a major issue. It seems like common sense that you shouldn’t tell lies on a resume, but people still need a reminder. We stumbled across an eye-opening infographic on LifeHack.org that looks at the world of resume lies. The statistics are impressive and are well worth a look. It will make you realize that lying on a resume is the stupidest thing ever.

Recruiters see all sorts of ridiculous things on resumes – World of Warcraft gaming experience, high school prom queen finalist, Oprah Winfrey’s gardener, CEO of Apple, and the list goes on. Recruiters are quick to identify blatant lies or useless resume information, but it’s a bit trickier to find the half truths. When approximately 53% of job applicants actively lie on their resumes, recruiters must act like detectives to discover the whole truth. It’s not cheap either. Resume fraud costs $600 billion a year!

Recruiters are constantly fact checking every applicant via social media, references, phone calls, and via targeted interview questions. If you’re a liar, you won’t slip through the cracks. The most common resume lies or embellishments include:

While most of these lies are relatively harmless, they are still shockingly common. And the trained eye of a recruiter will discover them. Your resume is essentially your first impression with your future employer, you don’t want to start off on the wrong foot. The following industries are known for finding out the truth:

We all know that lying on a resume is a big no-no. No employer wants to hire a liar. Will it make you stop lying on your resume to know that 51% of employers will automatically toss out your resume and application for the slightest white lie? Did you know that men are twice as likely to lie as women? Lies certainly do not increase your chance of getting a job. Just don’t lie on your resume. It doesn’t help anyone.

Discover more staggering facts about lying on a resume on Lifehack.org.

It’s easy to understand why people want to embellish the truth on their resume. It makes them look good and they think it boosts their chances of getting hired. It’s just not true. The risk is not worth it. Lying on a resume is one of the fastest ways to get your resume and application chucked in the bin. It will also tarnish your reputation and ruin your chances of landing your dream job. Don’t blur the lines on your resume. It can come back to haunt you.

Remember, honesty is the best policy. You’ll go farther with the truth.