Firefighters who make up a helitack crew are taken to the scene of a wildfire and often form part of the first line of defense against this type of event.

They are deployed when a quick response is required and/or the fire is in a location that would be difficult to access using ground-based forms of transportation.

Helicopters have been used to help fight wildfires since 1947. At first, they were used to drop water on the blaze. They still perform this function by dropping water from an on-board 105-gallon drum that the pilot can operate while in flight. In 1960, a three-member team of firefighters was sent out on an Alouette III helicopter.

The helitack crew is transported by air and dropped near the location of the fire. They use hand tools to create a firebreak to stop the progression of the flames. The helicopter is used to bring water to the blaze. If the fire continues to move forward in spite of the helitack crew’s efforts, the crew assumes a support role in trying to extinguish it.

Firefighters who are selected to be part of a helitack or helirapeling crew are considered to be an elite group. Instead of being sent to a location for several days at a time, like handcrews are, a helitack team may be called on to respond at a number of different locations in one day.

To apply for a job as part of a helitack crew, visit state departments of natural resources / lands websites. Also, see the Forest Service job listings on JobMonkey.

Applicants must have at least a year of experience as a seasonal firefighter or a Bachelor’s Degree in Agriculture, Forestry, or Range Management, as well as a valid driver’s license. Prospective helitack crew members who apply prior to February 20 each year get first consideration for all available positions. Other cutoff dates for applications are April 10, May 29, July 17, Sept 4 and Sept 30. The salary range for this position is $29,700-$43,000, and candidates are hired on a full-time basis for between 6-10 months of the year. 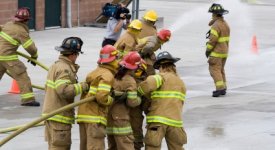