It’s wildfire season. If there’s smoke in the air, there might be wildfires raging near you. It’s not easy to put out a massive forest fire, but someone has to do it. 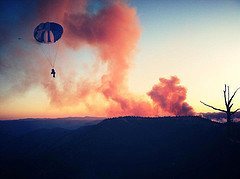 Wildfires are uncontrolled fires that are fueled by weather, wind, and anything that can burn. They ravage the landscape and can destroy anything in their paths. In the western US, thousands of wildfires destroy millions of acres every year.

Often wildfires are started by lightning, campfires, or tossed cigarettes. They can burn out of control as long as there is fuel, oxygen, and heat. It’s a terrifying disaster that must be stopped before it threatens lives and property. Find out what parts of the US are uncontrollably burning right now with this Forest Service map of all active fires in the US.

Wildland firefighters work for the US government to stop these blazing infernos. Brave firefighters are always on standby across Montana, Idaho, California, Oregon, Washington, and Alaska. They are ready to travel at a moments notice to fight fires wherever they may burn – often these fires burn in rugged terrain or wilderness.

Most wildland firefighters get their start on hotshot crews or helitack crews, where they are the first responders and front line defenders. After a few seasons, they can apply to become a smokejumper.

Smokejumpers are like the Forest Service’s special forces. This elite crew of firefighters will pack their gear, jump in a DC-3 or Twin Otter airplane and parachute in to middle of the forest fire. Yes, it sounds crazy, but it’s a real job.

Before you can jump out of an airplane to fight fires, you have to work at least a season on a wilderness firefighting crew. You have to pass physical tests and complete smokejumper boot camp. Then, finally, you’ll be ready to jump into the middle of a raging forest fire armed only with what you carry and your team. It’s one of the more extreme jobs on the planet.

Discover 15 of the Most Extreme Jobs

Once on the ground, smokejumpers will fight the fire from the inside out. They often land in some of the most rugged terrain in the United States. Their goal is to stop the blazing fire. When they are done, they have to trek back to the closest road with all of their gear.

Could you be a smokejumper? It’s a super cool, adrenaline pumping job. It’s dangerous, yet rewarding at the same time. You can find smokejumper jobs on the JobMonkey JobCenter. Good luck!