Makeup Artists are the visionaries responsible for creating both beauty and monstrosity. They can create something as simple as making someone look beautiful or plain and can also make someone look old, tired, or like some far off creature in an unknown land. They are responsible for helping the writers and directors tell the story. To most, makeup artists seem like people who simply throw on some powder and eye shadow but they do so much more than that. To a makeup artist, a face is a canvas. Anything is possible. 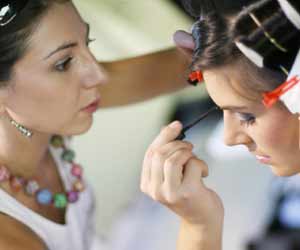 After taking specialty training, a makeup artist learns the scope of color and the importance of shadowing and contouring and the difference between shooting something in black and white or color, digital or film, reality or fantasy. A makeup artist in the film industry must have a vast knowledge of lighting and story and be able to work collectively with the Hair and Wardrobe Departments to bring a character to life. It can be daunting and can call for both patience and skill. The hours are long but the results are exquisite. A makeup artist lends a very big hand to giving the actor a real grasp of his character and that makes everyone on set happy.

Before considering becoming a makeup artist, there are some things anyone looking into this should think about. First, being a makeup artist means that you are working with a plethora of people, which translates into all types of personalities. Being a levelheaded, talented, patient, and adaptable person will do you justice in this industry. Second, you will be working face-to-face with actors; some famous, some talented, some unknown, and some, truly excited to be doing what they love. Discretion is a MUST. There is an unspoken rule of trust and confidentiality on any set. In the makeup trailer, a lot can happen and professionalism will always be most advantageous. Third, a makeup artist should know that diligence is key. ALWAYS, always, always (you taking notes on this? ALWAYS) take photos of each look and write down scene numbers and make script notes because re-takes happen all the time. Being prepared in the event that something goes wrong in post-production and knowing exactly how to recreate a look is crucial. Continuity is a makeup artist’s best friend in the film world. Fourth, yes fourth, any makeup artist coming into the film industry really needs to have the ability to create something out of nothing, especially when it comes to Special Effects. Often times, the Director will hold Production meetings and once in a while will trust your input on the onset. In the event he or she looks to you for some ideas, make sure you know the screenplay IN AND OUT and have broken it down by scene and lighting changes and have your vision readily available. Just because you’re a makeup artist doesn’t mean your input isn’t valued.

If you prove yourself in the Industry to be at the forefront of design and imagination – and the crew knows you want everything to come together – you can go far.

Lastly, a makeup artist in the Film and Television Industry has a strained schedule. Often the first ones on set and among the last to leave, knowing that your day consists of at least 12-16 hours will prepare you for rigorous shooting schedules and creative demands. This is mostly proven if there are Special Effects and Prosthetics involved. Typically a makeup artist doing special effects works with a team of people so that’s another arena requiring patience and the ability to work creatively in a large group. Sometimes you will just have to do what you’re told and eventually, you will be responsible for putting ideas to paper. No matter what your role is, don’t get into makeup for the glamour. Get into makeup because it excites you and inspires you. Makeup is an art form and that is going to sustain you when you’re tired, stressed, or hit a creative block.