The number of aquatic species involved in today’s aquaculture is significant and based on consumer demand. Finfish, classified by the aquaculture industry as fish with fins, are basically any marketable fish outside of shellfish or mollusks. The most common finfish in the aquaculture industry are carp, catfish, salmon, and tilapia, with each playing more or less significant roles depending on their global location. The major types of shellfish include shrimp and mollusks, such as clams, oysters, mussels, and scallops. Another important, but commonly overlooked segment of aquaculture, is the growth of seaweed, often referred to as algaculture. Aquaculture practices certainly exist for sport fish like trout, walleye, and perch, but in much smaller quantities than fish grown for human consumption. 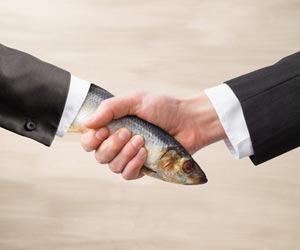 Catfish is the most commonly produced aquatic species in the United States, with primary production located in the southern states of Alabama, Arkansas, Louisiana and Mississippi along the Mississippi River and the Gulf of Mexico. The primary subspecies is the channel catfish, due to its high spawning efficiency and high survival rates.

Carp is an important food fish worldwide. Part of the cyprinid family, which includes barbel and minnows, carp is the primary aquaculture production in Asia and the Pacific, with China being the leading producer.

Salmon has become a high-profit aquaculture business of late. There are several types of salmon you can learn about on JobMonkey. Canada and Alaska specialize in salmon production, with both Atlantic and Pacific segments, while Norway is a significant producer for the Atlantic salmon market.

Originating in Africa, tilapia has become increasingly more popular in aquaculture. Beyond being favored for its good taste, it grows quickly and is fairly easy to produce. Tilapia has become a significant food source in Asia and the Pacific region. It is also grown in the southern United States. Tilapia does not survive well in cold climates, however. Shrimp and their larger cousins, prawns, are crustaceans and primarily produced in China and Thailand, although many shrimp farms exist throughout the world. The largest market for shrimp, however, is the United States.

The clams, oysters, mussels, and scallops are the primary mollusk species involved in aquaculture. An interesting aspect to this production is mollusks do not require a supply of fish meal because they take their sustenance directly from seawater and its components. Mollusks are grown around the world, primarily in saltwater coastal areas. Ideal locations include bays and estuaries which provide protection from open seas. Many mollusk farms utilize hatcheries to begin their growth and then attach them to sticks strung out horizontally in tidal areas or to ropes which are hung from floating rafts.

The production of algae, seaweeds and other aquatic plants in algaculture is big business as well. Total world production has exceeded 15 million tons annually. China produces about three-quarters of the world supply. The products in this segment are primarily used for fish meal production and fertilizers.

The Aquaculture Industry (NEXT PAGE)