Salsa dancing began in Cuba, later spreading to Puerto Rico and the Caribbean Isles. The word “salsa” means, “sauce”, hinting at the spicy flavor that many associate with this dance, with its hip-swaying, yet fluid, sensual grace. Salsa music contains Afro-Cuban rhythms, or beats, performed with a core groove, provided by a conga drum. Other supporting percussion instruments include: timbales, tres guitar, piano, bongos, clave, maracas, guiro, and the cowbell. 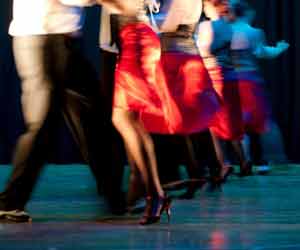 Salsa dancing is generally a partner dance, performed by a male (referred to as the leader) and a female (referred to as the follower), although there are recognized solo forms, such as the line dance, or suelta. Salsa dancing can be either improvised or performed in a set routine. The basic footwork (referred to as the “basic step”) of salsa dance is performed by making three weight changes, or steps (right-left-right or left-right-left) within a four beat count, and an entire cycle of the basic step is six weight changes (steps) within eight counts. The upper body remains level, with the arms in either an open position, where partners hold either one or two hands, or the closed position, where the leader places his right hand on his partner’s back, and the follower places her left hand on his left shoulder. The hips, of course, are quite active, and sway from side to side with each step.

Advanced salsa techniques involve styling, or adding personal, more elaborate touches to movements, such as shines (improvised, solo fancy footwork), leg work, arm work, shoulder shimmies and rolls, and turns. There are also many different styles of salsa dancing, each generally defined by the area in which they evolved. The styles are as follows: Cuban, which is dance in a circular motion through three points, Cali Salsa, or Columbian Style, Rueda de Casino, from Havana, where groups of dancers move in and out of a circle, swapping partners, New York style, and LA style. While there are many similarities between the styles, the main difference is the emphasis of particular beats within the music, and some of the footwork.

If you want to dance salsa, you are not alone. Salsa dancing lessons are becoming more popular all the time as salsa dancing continues to evolve in ballroom dance schools, nightclubs, and dance competitions around the world.

When most people think of ballet they immediately think of tutus and the Nutcracker. Ballet is a highly formalized style of performance dance that had its origins in the Italian Renaissance courts of the 15th century. However, it was not until later, in France, under the rule of Louis the XIV, that it became popular and developed its present-day French terminology. It was further developed in Russia and England before making its way to the United States, where its romantic style evolved into the Neoclassical style created by George Balanchine. Contemporary ballet is often a hybrid of ballet and modern dance. 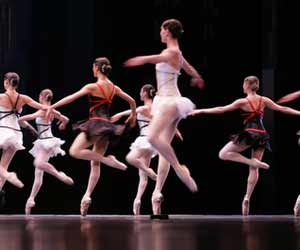 Ballet is both a highly technical and physically demanding style of dance, with a very particular dance vocabulary. The positions of the head, arms, and feet are very specific, often referred to by numbers, such as first position through fifth position. The steps themselves have retained their French names. The dance is generally performed to classical music, and ballets often include mime and acting, used to tell a story. Ballet dance works, referred to as “ballets” are choreographed, or created, by trained artists. Ballet companies often perform Classical ballets, those that have been in existence for some time, new works, meaning ballets that have just been created, or a combination of the two.

The image of ballerinas as fairy-like creatures in tutus is only a small part of the picture. Ballet can be quite difficult to master, and it takes ballet dancers many years of study before they are ready to dance professionally. Practice in ballet classes over time eventually yields the fluid grace that is associated with ballet. Female ballet dancers usually dance on pointe shoes, special dance shoes that have solid tips, which allow them to balance and spin on their toes. In addition to the flowing, precise movements of ballet, dancers learn more acrobatic movements, such as giant leaps, or jetes, multiple spins, or pirouettes, and high kicks, or grand battements.

Learning to dance ballet is a dream for many. Ballet lessons are popular among students of all ages because they help dancers to develop strength and grace. Even athletes, such as football players, skaters, and gymnasts also learn ballet to help them develop coordination.