Coaches like Urban Meyer from the Florida Gators or Bob Stoops from the Oklahoma Sooners are on TV almost every weekend and both are at the top of the coaching food chain in college football. 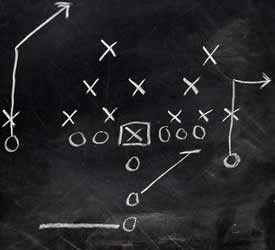 Both worked very hard to get to the top of the college football coaching mountain. Besides knowing how to coach the game, they also put in the hours of film study and coached several different positions before finally getting the chance to lead a program.

Meyer and Stoops are just two of over 1,500 head football coaches, from five different divisions, who coach on a given Saturday in the United States, not to mention the over 10,000 assistant coaches who are on their collective staffs.

So the question we’re looking to answer is – How do you get started in the college football coaching profession?

There are a number of ways, but first and foremost, you have to have a deep love of the game of football. Being a fan isn’t good enough. You have to be ready to eat, breathe and sleep football and then, having a working knowledge of how the game is played and wanting to work with young people are also helpful traits.

After finishing their playing careers, most college coaches get their start as, what is known as a “GA” or Graduate Assistant. These “coaches” are not paid, but get two years to learn on the job while also attending graduate courses at the school.

Essentially, GAs are unpaid interns, who help break down film, learn different coaching techniques, help run camps, coach a position and act as the assistants to the rest of the coaching staff.

Each NCAA member school – from Division 1 down to Division Three – has two positions available on each of their staffs and generally, they are filled pretty easily with the number of people trying to break into the coaching ranks, so obviously, this is a very competitive field.


After working for two years as a GA, most coaches then find a way to get on as a regular assistant coach on the staff of the program they “interned” with or, they use the experience they gain to move to another school and start their career.

Once they have a significant amount of success and usually at least five years of experience, they then are ready for one of the two coordinator positions.

After several years of success running one portion of the team, a coordinator then is contacted by schools whose coaches have either been fired or have moved on to other opportunities.

Most coaches have to go through the process for two or three years before they get their first head coaching gig, but once they get that opportunity, they realize the fun is just beginning.

Assistant coaches will put in an average of 60 to 70 hours per week once the season gets started, but head coaches typically put in close to 100 hours per week and many sleep in their offices at least two or three times a week during the season, which lasts from August (the start of camp) to December or January (the end of the season).

Head coaches aren’t just responsible for one position like assistants are; they are responsible for the entire team as well as the direction of the program. What does that mean? Well, besides coaching the team, developing a game plan, evaluating players and, hopefully, winning games, head coaches also have to meet with local and national media at least once or twice a week, they have fundraisers to attend, charity speeches to give, meetings with boosters, meetings with their bosses (usually the Athletic Director or the President of the school they work for), sitting down with academic counselors as well as talking with their players.

Having the ability to work with people is a must, but coaches must also have to ability to break through and talk to players much younger than them, generally at least 20 years younger if not more and they need to be very organized and meticulous while also possessing the energy necessary to recruit and evaluate high school players in addition to their many other duties.

As of 2018, the highest paid coach (Jim Harbaugh) makes over $9 million per year from University of Michigan while also getting supplemental incomes from different areas including media, apparel and speaking engagements.

While those are the top salaries for college coaches right now, most Division 1 coaches average $1.5 million per year with $600,000 being the lowest currently. A lot depends on the program a coach works for because some schools bring in quite a bit of money from boosters as well as television contracts and those schools generally pay much more than smaller schools whose generated revenue isn’t on the same level.

Still sound like something you are interested in? If so, it can be one of the most rewarding jobs in the world. Coaching allows you to work with young people, mold them into adults and it feeds that competitive fire that never leaves some people.

Job Title: College Football Coach
Office: Football stadiums and various college campuses
Description: Coach a specific position or an entire team
Certifications/Education: All NCAA coaches must have a college degree
Necessary Skills: Communication/People skills, Competitive nature, drive to be successful, knowledge of the game of football
Potential Employers: NCAA Division I, FCS, II, III, NAIA, JC
Pay: Range is anywhere from $35,000 for an assistant at a smaller-school to $6 million per year for a head coach at a top-level school