When thinking about sports careers at any level, youth or adult, the first thing one must consider is whether or not the prospective coach has a love of working with people. Anyone deciding to become a coach should have good communication skills as well as the patience to work with players from different skill levels. 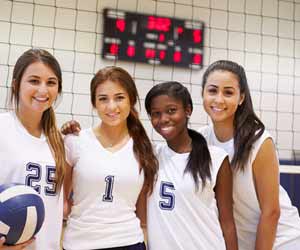 Pretty much every coach will have to deal with some sort of outside influence – parents and friends that can have either a positive or negative effect on things, fellow coaches, association directors, etc.

With families coaches can run into problems because many parents fund a lot of the programs and teams and feel like they should have a say in what happens with the direction of the program and it can take its toll on a coach. The most successful coaches are the ones who can manage this side of things while also making it clear that they are in charge of the program and will make the decisions on who does or doesn’t play.

Most of the men and women coaching volleyball, like nearly every sport, have some experience playing the game. They either played as a youth, in high school or played in college at some point.

This allows them to gain the requisite knowledge of the game, from rules and regulations to schemes and techniques, which they can then pass along in when they become coaches.

Besides the necessary people and teaching skills, coaches also need to have the organizational skills necessary to find practice facilities, schedule and run practices, get the team organized to participate in tournaments, find rides for players to those tournaments as well as games and do all of this while instructing and coaching the players.

In order to get into the volleyball coaching world, as with most sports, coaches need to have contacts at various levels and be willing to volunteer.

A lot of coaches play in adult leagues and find out about different coaching jobs through contacts made while playing on those teams since many have players who are also coaches.

Most coaches start out as volunteers, learning different coaching techniques and watching more experienced coaches lead programs can help them as they progress through the coaching ranks.

After volunteering for a period of time, some move on to take assistants positions on other staffs and start getting a modest salary for their time and efforts. Most make a salary in the $300 to $500 per month (during the season). The salary level depends on the size of the program they are in and how well-funded the team is by either the players or their families.

As far as becoming a high school or college coach, many coaches again volunteer to get their “foot in the door” and then work their way up by taking assistant jobs, working at the freshman or junior varsity level before getting the opportunity to run their own team as a head coach.

Most head coaches at the high school level get paid to coach for a season, usually in the $2,500 to $3,000 range while coaches in college can make upwards of $100,000 at the top programs across the country.

At the club and recreational level, head coaches make anywhere from nothing to somewhere in the $700 to $1,000 per month (during the season).

A way for coaches from all levels to supplement their income is by working as a counselor/coach at various camps and clinics where they can work with players of different ages and skill levels.

Coaches can also run their own camps or even “coach coaches” teaching different techniques and showing new ways to run different drills.

The time commitment for most coaches is about 20 to 30 hours a week during the season with practices, games and travel included in that time. Some coaches also go and scout their opponents if they can find the time to travel to a game.

For club teams they may have a three or four month schedule where coaches are expected to spend much more time with their teams, but once the season is over the time commitment is much less, although sometimes tournaments demand continued practice time.

All coaches, as well as players and chaperones, must be registered with USA Volleyball and they get a registration card and number after paying an annual fee.

When trying to volunteer for jobs, most clubs run their seasons between June and November and solicit for coach volunteers in October so when considering whether to “apply” for a job the early part of fall is when coaches need to start looking around.

Always remember, these teams, while playing at a very competitive level, are also about people bonding, forming relationships and learning the meaning of sportsmanship and fair play.

Think you have what it takes to be a volleyball coach?

Below is a list of different volleyball associations from different states, however, there are many more and can be found in an easy internet search.

Good Luck in your search and most of all, have fun with what you plan to do.

Job Title: Volleyball Coach
Office: Gyms across the country
Description: Coach an entire team or become an assistant coach
Certifications/Education: No educational background is required, but it is helpful to have at least a high school diploma or GED; All coaches must pass a background check and need to get an IMPACT Certification, a CAP Certification and a Referee Certification.
Necessary Skills: Communication/People skills, Competitive nature, drive to be successful, knowledge of the game of volleyball; Most organizations require First Aid and CPR training
Potential Employers: The thousands of youth volleyball clubs and teams as well as any high school and college team
Pay: Most assistants volunteer their time, but some get paid $250 to $500 per month for a season and head coaches for club teams can make as much as $1000 a month per season; high school coaches usually make anywhere from $2000 to $3000; Top college coaches can make over $100,000 at the top programs while smaller schools usually pay $35,000 or a “living wage” depending on the size of the program.