Stories abound about professional football players being mentored by their prep football coaches. It can be one of the toughest jobs in all of high school sports, but it can also be the most rewarding since most football teams are the face of a schools athletic program. 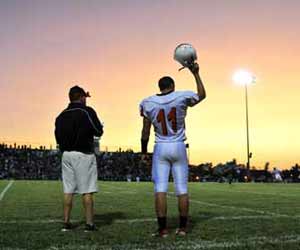 So, how do you get started?

Unlike the college or professional coaching positions, high school coaches, while they have a working knowledge of the game of football, don’t always have to have been players at one point in their lives.

A lot of times, the assistant coaches also have teaching jobs at the schools they coach at, but that isn’t a rule in most districts. Most just volunteer their time early on, before earning their way onto a staff.

Most assistant football coaches are paid a modest amount, usually $1,500 to $2,000 depending on the funds available from either the school or the booster clubs that have become so prominent at the larger programs. Some assistant coaches of bigger programs make in the range of $5,000 with some topping out at $7,000 depending on their experience and how well-funded the team is by their boosters.

Once they’ve had time on a staff to learn different techniques and schemes, then an assistant can apply for a head coaching position either with the same school they are already coaching at (but only if the head coach has decided to leave) or with another school.

As a head coach of a program, most are “handed the keys” to the entire program, meaning they hire coaches from little league, up through Pop Warner and junior high teams to the junior high teams and implement a system that kids can play in from the time they are young. The high school staff benefits greatly from this because it allows players to become familiar with a system and the terminology used by the staff and have been involved in many football camps and practices involving the high school coach.

Most head football coaches are teachers at the school they coach at and then earn a substantial supplemental income from coaching. A lot depends, yet again, on the funding from the school as well as the booster program. At top programs, who have very active booster clubs, coaches can make up to $50,000 just to coach and then throw in the fact they are usually a teacher at the school, they can make upwards of $100,000 or more.

The duties of a head football coach aren’t just limited to directing the team, running practices and coaching in games.

While an outgoing personality with an attention to detail is helpful, more than anything, a high school football coach, whether they are an assistant or a head coach, needs to have a desire to work with young people and to watch them grow.

Very few of the players on a high school football team ever play much past their senior year in, but the lessons they learn on the field, about working hard, never giving up and pushing themselves can last them for a lifetime.

Job Title: High School Football Coach
Office: Football fields and various high school campuses
Description: Coach a specific position or an entire team
Certifications/Education: Most high school coaches have a degree of some sort, but it is not a requirement
Necessary Skills: Communication/People skills, Competitive nature, drive to be successful, knowledge of the game of football, willingness to work with young people
Potential Employers: High Schools that have a football program
Pay: Range is anywhere from $2,000 to $5,000 for an assistant coaching position to a range of $50,000 to $100,000 per year for a head coach at a top-level school