College basketball has become one of the most popular spectator sports, specifically because of, what many term, “March Madness.”

This refers to the championship tournament held every March, that pits 65 teams, out of the 366 that compete at the Division 1 level, in a bracket that ultimately ends when the final two face off in early April. However, that is only a small portion of the teams that actually participate in college basketball. 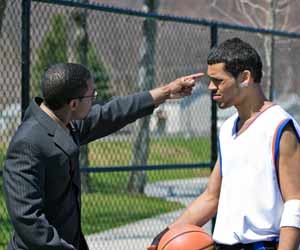 In addition to Division 1, there are two more NCAA divisions as well as the NAIA small school divisions. That is over 1,000 schools playing basketball (you can double that number if you include women’s teams as well) and all of them need head coaches and assistant coaches who have a knowledge of the game of basketball, as well as a solid foundation in fundamentals, to teach the young men and women in their charge how to play the game at the collegiate level.

All college coaches must have a four-year degree in order to have chance at coaching, but many get their start as a graduate assistant (GA) where they take classes at the school where they are coaching, earning a graduate degree while learning the ins and outs of coaching.

Many have playing backgrounds, but not all do. The top level Division 1 coaches, especially such high profile people as Kentucky’s John Calipari, Duke’s Mike Krzyzewski, and Tom Izzo from Michigan State on the men’s side as well as Pat Summit from Tennessee and Geno Auriemma from Connecticut on the women’s side, earn in the $1.5 to $5 million range.

A lot depends on the school they are coaching at, as well as the success of the program and the coach they are coaching under. Most top-level head coaches can negotiate pay raises and generous compensation packages for their assistants in order to draw the more talented and experienced coaches to their staffs.

To say coaches at the top-level schools spend a lot of time at their jobs during the season would be an understatement. Most spend 80 to 90 hours a week during the season, meeting with players and the rest of the coaching staff, the athletic administration, out on the road recruiting, taking calls at all hours of the day and night from recruits and high school or AAU (Amateur Athletic Union) coaches, meeting with boosters and game-planning for the upcoming games.

Game planning sometimes involves scouting the other team live, if they are playing a game close enough for the coach to go and watch, or getting game film and analyzing it, breaking down the opposing team’s tendencies, strengths and weaknesses and forming a plan to beat them.

During the offseason, coaches, both head coaches and assistants, head to tournaments and all-star games, keeping an eye on players they can recruit and evaluating them against other top talent.

Routinely, coaches must meet with AAU and high school coaches, watch film of recruits, meet with the recruit and their parents or other relatives (depending on the family situation) and often they meet with the compliance officer at the school they work for in order to make sure they are staying within the NCAA or NAIA rules regarding such matters.

Coaches spend an inordinate amount of time in high school and college gyms, but most will tell you what they do and the time they spend doing it is well worth it considering how they are able to guide and mold young men into adults, while also feeding their own competitive drive as well as their drive to be successful.

Job Title: College Basketball Coach
Office: Basketball gyms and field houses across the country
Description: Coach an entire team or a different aspect (offense or defense) of the team
Certifications/Education: Four year degree and knowledge of the game of basketball
Necessary Skills: Communication/People skills, Competitive nature, drive to be successful, knowledge of the game of basketball
Potential Employers: Hundreds of colleges across the United States
Pay: Range is anywhere from $35,000 for a beginning assistant coach in smaller schools up to $5 million or more for top head coaches at the top Division 1 programs