Several of JobMonkey’s sections have information about Outdoor Jobs. Honestly, anyone who came to JobMonkey for desk jobs in an office is probably at the wrong website!

There are some ‘cool’ jobs in offices but if you’re adventurous and looking for memorable experiences then try to get out into the wilderness. Spending a summer in one of America’s national parks or forests — on a river or in the Alaskan backcountry — just can’t be beat.

Summer jobs in the outdoors are plentiful and range from paying positions with national park concessionaries, the government, and summer camps to volunteer jobs with trail building organizations and wildlife groups. Both types of employers typically post their summer jobs on our job board.

If you want a seasonal job that’s ‘in the outdoors’ the best JobMonkey sections to read are: Alaska Fishing Jobs, Outdoor Jobs, Summer Camp Jobs, Ski Resort Jobs, Alaska Summer Jobs, Dude Ranch Jobs, and Land Tour Jobs. We mention ski resorts because many of them hire summer staff to operate their golf courses, lodges, and other summer operations.

There are some great locations that have lots of summer jobs and are great places to spend a summer working. These include: Alaska, Lake Tahoe, Northern Michigan, and beach resort areas.

For hard core nature lovers it’s best to start with the Outdoor Jobs section, which contains detailed information about positions with government agencies like the National Park Service, Forest Service, state parks agencies, and national park concessionaires. The latter are businesses that run the huge lodges and hotels inside America’s parks. Some of the interesting jobs you’ll learn about include:

National park concessionaries typically begin hiring in late-November through May for jobs that start in mid-May and last through early fall. Learn about the many different kinds jobs available in the Alaska summer jobs section and in the Outdoor Jobs section, including:

Other kinds of outdoor jobs to consider are those found at dude ranches, which are in the western states primarily, and even summer camps. At a dude ranch you’ll find some of the same ‘hotel’ type jobs
listed above but also wrangler jobs, naturalist positions, and trail guides.

Believe it or not most seasonal employers begin recruiting for summer positions as early as November for jobs that begin in late-May or June and end in September or early October. Be sure to visit the JobMonkey job board frequently as these employers post open positions regularly. Many of them also appear on the JobMonkey home page under the heading of Featured Employers. Look for their banners in the upper right column!

Jobs at Yellowstone Park (NEXT PAGE) 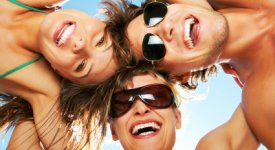