The term freelancer seems to be taking the world by storm. Freelancers are self-employed people who provide services for multiple clients at one time. These independent contractors typically set their own schedules, run their own businesses, and have a flexible lifestyle. If this sounds like what you’re looking for, it might be time to ask the big question – what type of work do freelancers do? 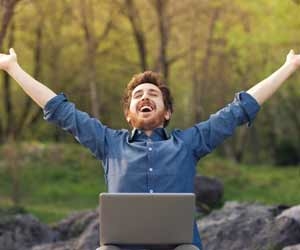 6 Easy Steps To Become A Freelancer

According to the FreelancersUnion.org, freelancing is a growing niche of the US economy. They note that 35% of the US workforce is freelancing. Over 56.7 million Americans are a part of the freelance economy and they contributed an estimated $1 trillion to the economy last year. But here’s the most interesting stat: 79% of freelancers said freelancing is better than working at a traditional job!

The rapid growth of the freelance economy has been made possible by the advance of technology. The smartphones, laptops, and Internet connections we have at our disposal make freelancing possible. Combine that with the expansion of the shared economy, or gig economy, and freelancing becomes relatively accessible to everyone.

So back to your original question: what type of work do freelancers do?

Of course, there are other niches where freelancers can make a living, but these are the primary ones. Maybe it’s time to consider finding freelance work in one of these freelance niches. Which ones interest you?

How To Set Your Freelance Rates

Freelancers can work from anywhere, set their own hours, and make good money. Freelancing is the definition of freedom, flexibility, and independence. But at the same time, freelancing isn’t for everyone. To be a successful freelancer, you need to be organized, self-motivated, able to meet deadlines, and willing to push your comfort zone. Freelancing doesn’t come with the traditional perks and benefits of regular employment and it most certainly has its own unique challenges.

Is freelancing right for you? That’s for you to decide. Try it for yourself and see if you want to pursue the freelancing lifestyle.