The 2016 Summer Olympic Games are happening right now in Rio de Janeiro, Brazil. The events are officially running from August 5 to 21, 2016. Over 11,000 athletes from 206 countries will participate in 306 events in 28 sports during Rio 2016. Are you watching these Olympic athletes compete for gold, silver, and bronze? 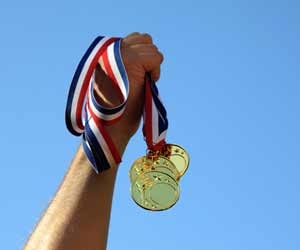 These athletic superstars are the best in the world at what they do. They will perform at their ultimate best as they represent their country on the world stage. To reach this level of athleticism they have trained for years to perfect their muscle memory, build their skill set, and reach their peak. Now is their chance to shine.

It might come as a surprise, but most Olympic athletes are not paid a full time wage for their hard work. Despite training around the clock, these Olympic athletes still have to make a living so that they can pay the bills. They must also cover the costs of coaches, trainers, medical expenses, equipment, and travel. So what are the day jobs of Olympic athletes?

We found a handful of different websites (ThePennyHoarder.com, ABCNews.com, SportsManagementDegreeHub.com, Glassdoor.com) that highlight the day jobs of Olympic athletes. Find out what some of your favorite summer and winter Olympic athletes do to pay the bills below:

As you can see these Olympic athletes have all sorts of cool jobs. They have worked hard to become some of the best athletes in the world and have maintained steady jobs. Hopefully this will motivate you to find jobs that allow you to pursue your dreams.

Now if a US athlete wins a medal they do collect a medal bonus – $25,000 for Gold, $15,000 for Silver, and $10,000 for Bronze. But this is not a lot of money considering the time and effort that they put into win it. There are a handful of athletes who have capitalized on their stardom and signed lucrative sponsorship deals, like Michael Phelps did. But most of the athletes we are watching compete at an international level will ultimately head back home at the end of the month to a normal job like you and I have.

Best of luck to all the Olympic athletes from around the world. We look forward to watching you compete for medals in this Olympics and in many more in the years to come.