Have you ever wanted to design theme park rides? Disney Imagineers are the creative team that not only design the attractions, but also determine the appearance of the shops, theme the dining locations, build show sets, and create a variety of other imaginative projects. The term ‘Imagineer’ was coined in 1952 by Walt Disney himself to describe the privately-owned company he’d utilized in the building of Disneyland® California. Today, this team is as much the Research & Development arm of the company as they are the architects and designers of the parks. They are also charged with ensuring “show quality” throughout the properties and confirming standardization (i.e., signage, nomenclature, appearance, etc).

By blending creativity and innovative technological advancements, Walt Disney Imagineering has produced some of the world’s most distinctive experiential storytelling…”

Imagineers wear many hats – architect, engineer, audio/visual technician, mechanic, animator, storyboard artist, writer, set designer, financial advisor, and much more. Although it is impossible for a single Imagineer to have degrees in all of these fields, they do need proven experience in more than one discipline to even be considered for the job. Applicants having internships in similar fields will be given closer consideration for these jobs than outside candidates with no experience. Plus, you’ll need to show your creativity with a killer portfolio of your previous work. Author, screenwriter, and Disney Imagineer Jason Surrell said in an interview, ” …I think for people who are interested in pursuing that kind of thing it becomes a matter of getting yourself in a position where you can come up with ideas that get you in the direction you want to go it. And then once you’re in place like that, you have to throw everything at the wall and see what’s going to stick. That’s what I did and it’s really a matter of perseverance and hanging in there…literally,”

Most attractions/shops/displays/etc. start out with an impossible idea either suggested from a fellow engineer or a corporate partner. It is the Imagineer’s job to make the impossible possible. Teamwork is mandatory – no one attraction can be designed by a single person. It takes hours of discussion, drafting, and disappointment before a storyboard can be created and blueprints given to the park executives. Then comes the revision stage. Additionally, anything the Imagineers come up with also has to be appropriate for the area. For example, a futuristic rocket ride probably won’t fit well into a Wild West-themed area.

In short, it can take anywhere from five to fifteen years for a single idea to go from paper to park. But, the hard work pays off when Imagineers see their “baby” in crowning glory on opening day. 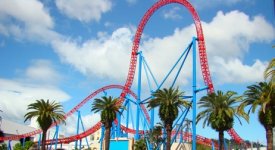