Do you have a passion for underwater conservation? Or an interest in the polar ice caps? Or are curious about life on coral reefs? Or are fascinated by the migration of whale sharks?

Or wonder what undiscovered creatures may lurk in the depths of the sea?

If you do, then a job as a scientific diver is one you should consider. Usually scientific divers are scientists first and divers second. They use SCUBA as a way to study their science and collect data. And there are an abundance of sciences that want to journey under the sea to explore and learn what they can. Most underwater scientists are marine biologists and geologists.

Science diving can take you to a wide variety of locations worldwide. Water covers a huge portion of the world’s surface, leading to plenty of underwater realms to explore. You may study great white sharks in South Africa, or the ice caps in Antarctica, or the coral reefs of Honduras. You may watch the mating patterns of seahorses or study rocks and sediment near a tectonic plate. The options are plentiful.

A good way to get involved in science diving is to have a science background. Many scientific research expeditions are based out of universities and colleges. Often they offer great opportunities for people to hop on board and help study the underwater environment.

Scientific expeditions are very budget dependent, so pay can vary tremendously between jobs. You may work as a volunteer or get paid a respectable wage. In general, a science diver can expect to make between $25,000 and $30,000 U.S.

A good place to begin your search for science dive jobs is the American Academy of Underwater Sciences or colleges and universities with a strong program in your science of choice. 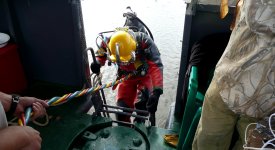