Anusara yoga was founded in 1997 by a teacher named John Friend, who characterizes this style type of yoga as a “celebration of the heart.” Anusara yoga classes are upbeat and incorporate a sense of community.

Vinyasa-style yoga classes involve flowing postures coordinated with rhythmic styles of breathing to create an intense workout. One sub-type of vinyasa yoga is called ashtanga. Ashtanga yoga is based on a system of six asana series that continue to become more challenging, which allows you to work through each series at your own pace. 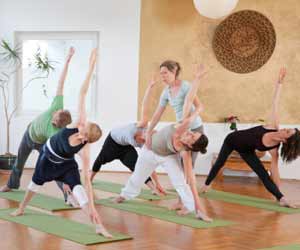 Jivamukti is another style of yoga that is physically intense and highly meditative. Jivamukti classes incorporate vinyasa ashtanga-style asanas with music, chanting, meditation and readings.

Bikram yoga is also an intense style of yoga. Every Bikram yoga studio features a room that is heated up to approximately 100 degrees Fahrenheit. Bikram yoga places an emphasis on sweat as a method of ridding the body of toxins.

Integral yoga is one of the gentler styles of yoga that are practiced as a form of meditation. Integral yoga classes balance physical effort with plenty of relaxation. The practice itself is quite gentle and includes breathing exercises, guided relaxation and sitting silently in meditation.

Iyengar yoga provides you the opportunity to go deeply into each of the yoga postures by helping you pay close attention to the precise muscular and skeletal alignment of each position. Iyengar yoga is well known for its use of props like belts, blankets, blocks and chairs to assist people who are injured to practice yoga comfortably.

There are three stages to the practice of Kripalu yoga. The first stage is called willful practice, which puts an emphasis on breathing, proper alignment and the presence of consciousness. The second stage is surrender, which means being able to hold postures beyond the level you can comfortably tolerate. The final stage of this type of yoga is known as meditation in motion, which involves a total trust in your body’s ability to perform the postures that are necessary for you to be able to enter a state of deep meditation.

Kundalini yoga first began as a fairly secret practice that was only known by very few people. The modern practice of Kundalini yoga now integrates a dynamic series of breathing exercises (involving a greater variety of these exercises than is normally included in other types of yoga), and more chanting of mantras than is found in other yoga styles.

Many Kundalini yoga studios in particular offer prenatal yoga classes designed specifically to cater to the needs of pregnant women. Prenatal yoga is a gentle type of yoga that helps women become healthier during pregnancy and prepares them well for the actual process of giving birth.

Restorative yoga, as its name suggests, helps students focus on relaxing their bodies in restful positions.

Like prenatal yoga, restorative yoga is a gentle yoga, similar to Iyengar yoga in that it utilizes props like blocks, blankets, bolsters, balls and chairs.

Sivananda yoga helps you answer one of the most basic philosophical questions known to humankind, which is “Who am I?” Sivananda yoga is a system of yoga based on the teachings of Swami Sivananda, a doctor who devoted his life to the dissemination of the various practices of yoga. Sivananda yoga involves five basic points, defined as proper exercise (yoga postures), proper breathing (pranayama breathing exercises), proper relaxation (called shavasana), a vegetarian diet and meditation.

Viniyoga is a form of yoga therapy that helps treat health issues associated with specific diseases. It helps heal patients physically, emotionally and spiritually through including postures appropriate for many different kinds of health complications. Viniyoga also incorporates imagery for the circulatory and respiratory systems and meditation that focuses on healing the heart.