Cosmetologists looking for a bit livelier place to work may consider a position in the hospitality industry at a resort, hotel, spa – or even a job on a cruise ship.

These industries have a large supply of high-end clients who are usually in demand of many beauty services, including hair styling, makeup, manicures, pedicures, facials, hair removal, and massage. Cosmetologists who work in the hospitality industry enjoy an ever-changing clientele, as opposed to the regular clients of a cosmetologist in a typical salon. Because of the sophisticated clientele they often serve, several years experience working in a traditional salon is usually required, and cosmetologists working in the hospitality industry can expect to make anywhere from $2,200 to $3,000 per month, depending upon their location. 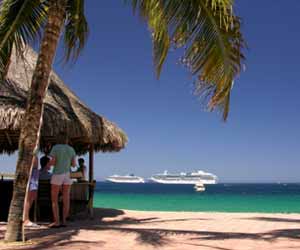 For some cosmetologists, the downside of working in the cosmetology industry can be the time away from home, especially if they are working aboard a cruise ship. Cosmetologists who pursue these jobs often are single and have a desire to travel and meet new people.

Many cosmetologists get into the business because they think it will be glamorous. Some of the most glamorous places cosmetologists can work are undoubtedly television and movie sets.

Cosmetologists don’t need to live in New York or Los Angeles to get these types of positions. Many find the opportunity to work on locally produced theater and television shows such as the local news, and sometimes when movies are shot on location, the producers will hire local professionals. Commercials are produced in many cities. Most of these cosmetologists still keep their regular jobs in salons to make sure they have a steady income, and then combine their day to day job with some part-time location work for a varied, fulfilling career.

But if you’re setting your sights a little higher, you may have to relocate after all. According to www.beautyschooladvisor.com, Beverly Hills hairdresser Billy Lowe has done hair for actors on the sets of “Desperate Housewives,” “Queer as Folk” and “The Ellen DeGeneres Show,” and he’s also the personal stylist to Jennifer Coolidge (she played the manicurist in the movie “Legally Blonde” and Joey’s agent in the TV show “Joey.”) Lowe says that a good way to start in this field is to appy for a job at a salon that has a reputation for attracting a celebrity clientele. He also suggests freelancing, which means you’re not based at any one salon but are available for work as projects come up. To succeed at freelancing, you’ll need to have some experience in film or TV work.

Doing hair and make-up on celebrities usually involves two different types of work, either being a star’s personal stylist or make-up artist, both day to day and for professional appearances, or doing the hair or make-up on the set of a show or movie. This job usually involves working with wigs and doing lots of research, since the cosmetologist may have to turn an actor into a monster, create a style for a different historical period, or develop a series of looks as the story follows the character’s aging. This type of craft is a true specialty, according to Hollywood hairdresser Sean Flanigan, head of the hair department on the set of “Grey’s Anatomy,” and spokesperson for Joico hair products.

Flanigan got his start by getting involved with theater – but he said it doesn’t necessarily have to be in New York or Los Angeles. He suggests volunteering for local community theater – according to Flanigan, “no one turns away a volunteer hairdresser!” Another place to try is the theater department of a local community college.

According to Flanigan, salon experience gained by a cosmetologist is valuable, but it is often not enough. “Film and television aren’t just about haircuts and blow dries. Period hair styling and wig work are huge! When you do this kind of work, you end up being a specialist,” Flanigan said in an interview on www.beautyschooladvisor.com. “When I worked on “Buffy [the Vampire Slayer],” there were a lot of flashbacks, and we had to recreate the looks of the day. At beauty school, you learn things like fingerwaves and pincurls, which everyone thinks you need only to pass your state boards. But we used those techniques to get the hair to look the way it did when people set hair that way.”

Flanigan also has a lot of experience with wig styling, and suggests practicing with wigs to get familiar with how to work with them. “Wigs are a big part of this [celebrity styling]. For example, the story could have a fire, and we have to make the character look like a burn victim. How do you make hair look singed when the actor has a full head of hair? Or sometimes, a flashback requires that a character look younger. For “Grey’s Anatomy,” we used a wig to make actor Chris O’Donnell look younger in a flashback. We often use wigs to make women’s hair longer. There’s a lot of that type of thing. And on “Buffy,” we had to turn actors into all sorts of creatures.”

When a cosmetologist works with celebrities, they often have just a few clients, as opposed to a large clientele common in a traditional salon. Says Flanigan: “At ‘Grey’s Anatomy,’ I have four clients. So I do the same people over and over instead of having a large client base as you would in a hair salon. We’ve become a tight family – sometimes it’s a dysfunctional family, but we do have fun! A regular weekly television show can require you to be on set 65 to 85 hours a week. They don’t necessarily do scenes or even episodes in order, so the challenging part is keeping track of what their hair looked like where they left off. We have to make sure their hair looks the same.” He said that television work can be demanding, but if the cosmetologist wants to be a success, she will do it. “It’s the same old adage – put your heart and soul into your dream, and you’ll succeed.”

And speaking of dreams, Flanigan also does “McDreamy’s” a.k.a. Patrick Dempsey’s hair, too.