Commercial truck driving and commercial auto shipping are fairly secure career prospects. Goods and vehicles will always need to be shipped to businesses and vendors, and no mode of transportation is as convenient and versatile as a commercial tractor-trailer. Commercial truck drivers need not fear of their jobs being outsourced to overseas companies, and until products can be beamed from one area to another, Star Trek style, trucking and auto shipping services will keep the economy going. 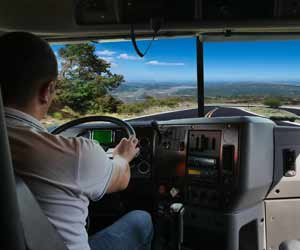 North American trucking companies employed some 3.4 million drivers in 2017, according to the Bureau of Labor Statistics, and those jobs aren’t going to go away anytime soon. The Bureau expects trucking jobs to grow about as fast as the national average. With the large number of older truck drivers that are expected to retire, commercial truck driving and automotive shipping careers will be available to new recruits.

All that being said, the trucking industry is not immune to the cyclical changes of the economy. In fact, the trucking industry is one of the more vulnerable industries during a sagging market. When the economy loses forward momentum and begins to drop, companies buy less products, hence not as many tractor-trailer drivers will be needed to haul goods around the country. During these market recessions, companies will hire less drivers, give newer drivers fewer hours, or even begin to lay off drivers. Despite the fluctuations, trucking is a fairly secure career.

Different types of companies are more vulnerable to market recessions than others. Major freighters, such as Swift, Landstar, and Walmart drivers may see few changes in their work load during a slow market.

Grocery deliverers are also fairly immune to market changes, since food goods are needed whether the economy is strong or weak. Privately owned freighters and automotive shippers, on the other hand, are very susceptible to economic conditions. Not as many vehicles are purchased during hard economic times, and fewer goods need to be delivered by private shippers.

Demand for different jobs varies. Competition is high for the local shipping jobs since these local shippers get paid relatively well and enjoy reasonable hours. Cross country drivers will always be in high demand. Since cross country semi drivers and automotive shippers work long hours and spend days, or even weeks, away from home, not as many people are willing to perform these demanding tasks. However, long distance shippers are paid the best.

The wage of freighters and truck drivers differs greatly. Those that drive heavy duty trucks weighing in excess of 26,000 pounds get paid the most. They also require the most training and licensing. Any person who aspires to drive a tractor-trailer will need a class A commercial drivers license. Light truckers, those that drive vehicles under 26000 pounds, are paid less, but also require less licensing. Many light truckers do not require any licensing beyond a conventional drivers license

The average income of drivers varies by industry. Most truckers are paid by the hour. General freight shippers, those that drive cross-country, were paid an average of $19.87 per hour in 2016. Grocery deliverers were paid on average of $19.31 per hour, and specialized freighters, such as automotive and livestock shippers, averaged $18.35 per hour.

Career prospects in trucking will be favorable, even for those new to the work force. The number of trucking jobs will grow with the national average, and the large number of baby boomer truckers expected to retire will provide many job openings in the coming future. Wages are expected to increase, and job security is likely to remain high.