An ordinary seaman is the starting point for mariners who want to work on deck. Depending on the type of ship, an OS will be a part of the deck department in cargo evolutions, docking and undocking and maintenance of the vessel (chipping, painting).

It’s an apprenticeship role, so during the major evolutions of the ship an OS will be learning more than doing. One sole responsibility of an OS is the sanitation of the vessel. An OS will be required to clean and maintain the vessel’s interior, and sometimes help out in the galley depending on the structure of the ship. Also, an OS can be part of the bridge watchstanding team if the vessel has a position for them on the bridge. This is very important, as an OS upgrades to an Able Bodied Seaman, one of the main responsibilities is to stand a bridge helm/lookout watch.

Salary, like all the other jobs on a ship, varies from ship to ship whether it’s an oil tanker or cruise ship. An Ordinary Seaman can average anywhere from minimum wage to $80-$100 per day. An Ordinary seaman tends to work longer periods of time for two reasons. One, he or she is making a lower wage, so they need to work more to sustain a living and two, the more they work, the faster they gain the sea time to upgrade to AB, which is usually a pay raise. The living/working conditions will also vary from ship to ship. A larger ship will respectively have a larger living area, like a private room with a shared bathroom. A smaller ship will have a multiple berthing area and shared head for all crew. It all depends on what ship you are working on.


Time off varies, again, on the ship. AN OS can work on a fixed rotation, like two weeks on two weeks off. They can work as a member of a merchant marine union on a four month rotation with 2 months off. Or work for the US government, and be a full-time employee on a ship. It all depends on which industry the OS is in. Some ship will have the new Ordinary Seaman work in all departments for a certain time: deck, engineering and stewarding so they can get a feel for the operation of the vessel and the experience.

There is no experience required to get started as an Ordinary Seaman. You can apply through the Coast Guard to get your Merchant Mariner’s Document. It requires a medical physical, drug test and application. Simply go to the Coast Guard Website at www.uscg.mil/stcw and click on the “new mariners” tab. Also, there is a book on getting started called The New Hawsepipe www.thenewhawsepipe.com by Leonard Lambert, that gives step by step information on getting your MMD from the Coast Guard. After that, you can start contacting companies and unions for a job. 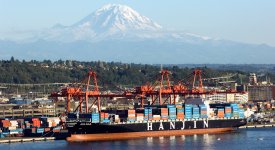