Did you that in the last 10,000 years at least 1,500 volcanoes have erupted? While most eruptions are very weak, there is potential for volcanoes to be incredibly dangerous. Some volcanoes constantly erupt with no consequences. Others have the potential to kill thousands of people or even wipe out the human species as we know it. This is why we need to study volcanoes.

A volcanologist is a scientist who studies volcanoes. Volcanologists constantly seek insight into things like how volcanoes work, why and when they erupt, and how much damage they might cause. They study past volcanic activity to predict future activity. It’s a highly inaccurate study, but any information on volcanoes is better than none. 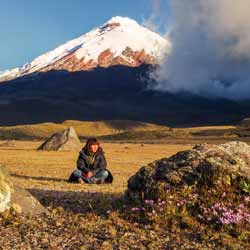 Volcanoes are located anywhere that the Earth’s surface has ruptured and hot lava, ash, or gases escape into the atmosphere. There are hundreds of volcanoes located in the United States – mainly on the West Coast, the Hawaiian Islands, and Alaska. Volcanologists also travel to other volcanic hotspots like Yellowstone National Park, New Zealand, Italy, Indonesia, Iceland, and the Pacific Ring of Fire.

In these places, volcanologists can study different types of volcanoes like fissure vents, shield volcanoes, lava domes, cryptodomes, stratovolcanoes, supervolcanoes, submarine volcanoes, subglacial volcanoes, or mud volcanoes. Volcanoes are a fascinating part of our world. Unfortunately, volcanoes are somewhat unpredictable. Some are extinct. Others are active. Some switch from dormant to active unexpectedly. Volcanologists devote their careers to studying these geological phenomenon. Their work is driven by curiosity and their research has the potential to save lives and limit damage.

You can find a cool map of erupting volcanoes on Volcano Discovery. Learn more about volcanoes from Volcanoes National Park in Hawaii or the Alaska Volcano Observatory. These are the types of places where volcanologists spend their time.

Volcanologists work in labs and classrooms, but they also spend time in the field. There they analyze rock, debris, ash, pumice, lava, magma, and gases. They take test samples near magma hot lava. They descend into volcanic craters. They regularly monitor eruption cycles. They map volcanic activity. They look at how volcanoes effect the environment and how volcanoes can cause devastating mudflows, ash flows, tsunamis, and even starvation. Volcanic research is an ongoing process that will never end.

To become a volcanologist, you must seek higher education in sciences like earth science, geology, chemistry, geography, or physics. There are some university degrees devoted to volcanology, but most aspiring volcanologists start with geology degrees. A bachelor, masters, or doctorate degree in one of these subjects is required. After earning a degree, volcanologists can find work with universities, state geological departments or government agencies like the USGS or the National Park Service.

A volcanologist’s job is to research, analyze, interpret, publish, and present their findings to the public. Scientific research is a time consuming process, but studying volcanoes is an exciting way to make a living. It’s like something out of a National Geographic film.

There are not many jobs in this niche, but there is also not much competition. For those who do find volcanologist jobs, you can expect to make a salary between $30,000 and $90,000 per year. According to Oregon State University, the average annual salary for a volcanologist is $48,000.

How to Become a Professional Watchmaker (NEXT PAGE)