DAW Operator
This is a position that has gained importance in the last several years. Often referred to as a Pro Tools operator, their function is to edit performances and 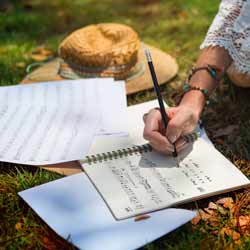 Almost all current projects nowadays have a DAW operator, however, rarely is this a dedicated position. Usually, the Recording Engineer or the Mixing Engineer will perform this function as good or better.

Music Arranger
An arranger will typically move instruments and musical notes around to create a more pleasing and marketable product. They will also apply this skill to all the sections that traditionally make up a composition.

Music Composer
As a composer, you will be required to create an original music score. Usually, when using the term composer, it implies that the music to be written will involve symphonic elements. Most major films utilize a composer.

Songwriter
A songwriter is similar in function to a composer. The difference is that a when using this term, it implies music that will be written for national radio airplay such as music for the pop genre. Keep in mind that this is a generic description and there will be exceptions to this rule.

Re-Mixer
This is another position that has gained notoriety over the last several years. A Re-Mixer is used to create an alternative version of a major song release. The term can be misleading, however. As apposed to the earlier descriptions of a Mix Engineer, often a Re-Mixer will create an entirely different song using new sound elements. Traditionally, they will take the lead vocal and one or two original elements when making the new version. They function more as songwriters than the traditional mixer.

Programmer
Since most of today’s popular music involves sequenced performances and drum machine beats, a programmer is a common necessity. Although, a Songwriter may perform this job, the current Programmer will provide microscopic editing of computerized ‘triggered’ instruments in order so that they sound more natural with a human feel.

Maintenance Technician
Possibly the most important and most under-appreciated position of all. There is so much complex equipment involved in today’s recordings that it is inevitable that something will be broken, or is about to break. Since ‘time is money,’ no production can afford downtime. A maintenance technician will provide on the spot assistance to fix the daily problems that occur during any production. If you are looking to break into the music studio world, starting out as a Maintenance Technician may be your best bet.