In television post-production, there are numerous jobs that you can find requiring many different levels of expertise. Most of the post-production TV jobs are centered on the editing side of things, whether it is television video editing or TV sound editing. To edit TV shows you will need to know how to use the editing equipment and various computer programs are needed if you want to be a TV animator and work with green screen on set. 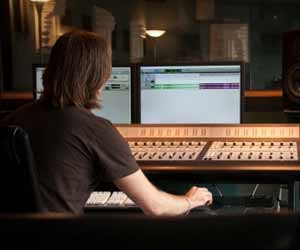 Television post-production offers many exciting opportunities for people wanting to work behind the scenes in television.

The TV sound editing will be done by a sound editor or sound engineer, who will also do the final mix of the audio for a television show or while editing TV commercials. The sound editor is responsible for the finished sound that you will hear for any TV show, reality series, news broadcast, live event, or TV commercial. It will involve making sure that there are no echoes, fixing sound glitches, editing the sound so that it fits with the speech, and mixing in music and sound effects.

A sound editor will need to be trained in audio engineering through a university or college, usually completing a 2- or 3-year course. Most sound engineers start off working for a production company or TV network, editing and mixing sound for news broadcasts or edit TV shows that are shot in studio. A mixdown engineer will have to be trained in audio college or university, but also have experience in the industry before being hired by a large studio or TV network.

How to Start Doing Post-Production Sound

Post production TV sound editing requires a lot of skill as you will eventually produce the sound effects, and put together the entire track of sound for a TV show.

Most sound editor jobs begin as very small, easy jobs and as you get more experience you will be offered the more complicated TV sound editing jobs. You should contact as many companies as you can after studying and schedule interviews.

The sound editor will receive a salary based on his or her skills, experience, and training. Most audio engineers in the TV industry start off working for approximately $35,000 per year. You can also start working as a sound designer for TV shows, which could involve helping to create the opening songs and music for talk shows and series. This will increase your salary quite noticeably and you can usually charge for this by the hour or project.