Playing the part of one of the characters on a TV series is up to the TV actors. These trained and talented people make the shows you watch possible and interesting. They transport you into a world of fiction and can be anyone. Leading actors in television earn huge actors salaries, while the smaller roles and TV commercial actors get less per day for the jobs they do. Actors usually belong to unions that will make sure they are treated correctly and paid properly. If you want to be one of the leading actors in television, you should join a union as soon as you can after graduating. 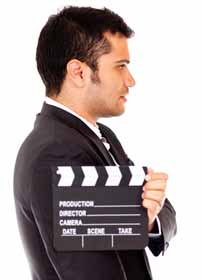 The TV show actors have the job of bringing a story to life. They are the characters and must be able to act out scenes convincingly while remembering their lines. As a television actress or actor you will also have to attend rehearsals for the TV shows to prepare for the days of shooting. Here you might be taught certain skills that you need for the part. Many television actresses and actors learn sword fighting, how to hold and shoot guns, how to do stunts, and more. The actors salaries will also depend on the type of role they have, with TV actors doing their own stunts, getting paid more.

To become one of the leading actors in television, you must have proper acting training, and while not all TV actors have official training, most have completed some kind of course in speech and drama, film and TV or night acting classes. Many TV show actors go on to film jobs, and many stay in TV their entire acting career, especially when it comes to soap operas. Training for TV commercial actors is not really acting training, but more about how to work with the camera and requires a lot of modeling. In fact, most TV commercials use models instead of actors.

How to Become a TV commercial Actor or TV Show Actor

To become a TV actor you must have a passion for acting and working in the TV industry.

You must have a talent for acting and you must also have a strong determination and hard shell, as you will get rejected lots of times before you even get one TV show part or TV commercial. After training, television actress hopefuls, as well as TV actors usually join an agency. They are promoted through a database and sent to various castings and auditions. You must always follow the correct protocol for castings and auditions.

You must keep trying no matter how many times you audition because eventually you will be chosen for something. The trick is to keep busy and constantly meet people and make contacts. Soon you will get better auditions and land better roles.

The actors’ salaries for TV shows are worked out per episode and rehearsals are also taken into account, worked out on a percentage of the episode rate. TV commercial actors get paid for the days they shoot and after that a usage fee for the period of time the commercial is aired on TV. This is usually a percentage of the daily rate. As you can imagine actors salaries change all the time, and while some earn a few hundred for starting out, others can earn in the millions each month. The leading actors in television series in Hollywood can earn millions per episode.