Working in the television broadcasting industry is considered to be ‘pretty cool’ by the average person – don’t you think? We buy into that, which why there are so many broadcast-related job listings in our Job Center. If this industry appeals to you, then don’t hesitate to apply because TV jobs are widely available. Where might you find work?

TV shows that are live in a studio with a TV host and audience are the popular talk TV shows that we all love like the Oprah Winfrey Show among others. These shows require an entire production team to air and the types of television jobs you can get in TV shows like this include camera operators, producers, assistants, researchers, directors, PR, sound and music (sometimes a DJ), and more. To be involved in this kind of TV will require you to work well under pressure and have your wits about you all the time, as you will be shooting live broadcasts most of the time. 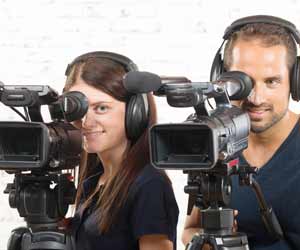 Infomercials are organized like a TV commercial, but are just longer and require a host or TV presenter. Most of the infomercials are shot in studio, but some may be recorded in a public area like the beach, at a shopping mall, or gym. Infomercials require a smaller production crew and if you happen to be on location somewhere, you will usually only have a director, camera operator, sound engineer, presenter, make-up artist, and perhaps a producer.

A TV news broadcast is done in the studio of a network TV station and is usually live. You have a camera operator, producer, director and sound engineer as well as the news anchor or announcer. A TV news broadcast might also involve a weather man, and sports TV news anchor. The live broadcast of news is high pressured and there is no room for errors. You will also do well in this area of TV if you are a news writer, journalist or climatologist.

TV series are filmed in a TV studio or on location and are fictional stories commissioned by the TV networks for entertainment purposes. A production company will be hired to produce the TV series and you will find the appropriate TV jobs at these production houses.

Documentaries are shot without a set production schedule, and usually just a cameraman, sound engineer and director will be used for a documentary along with a presenter. Most of the TV jobs here are post production.