The difference between radio and TV is the obvious use of images in television, and to create these images, a cameraman is required for any TV job.

The TV cameraman is also known as the director of photography (D.O.P), or can also be called a camera operator.

This professionally trained person will use various pieces of equipment like a television broadcast camera or TV video camera as well as a tripod, lighting, grips, and other things to ensure the best pictures and angles possible.

Note that you should also read the movie jobs section of JobMonkey for additional position information. 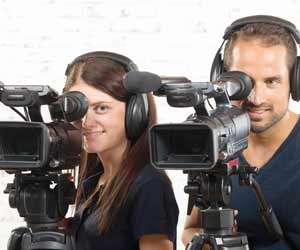 The cameraman has the unique job of capturing all the correct footage and angles for TV shows, news broadcasts, live events, interviews, and other important occasions. The director of photography job will also entail looking for and using the best locations possible for various magazine shows and live broadcasts, and it will require you to have extensive knowledge of the equipment you are using. This job is one of the most important on any set or in any studio, and you have to know exactly what you are doing to get the best shots in as little time as possible, without making too many errors.

Anyone interested in becoming a D.O.P should first be fully trained at a film and TV college or university. You can also receive training as a camera operator at certain networks that offer in house training. You will be taught everything about operating a TV video camera, angles, lighting, distance, fading in and out, panning, framing, and more. You will also learn about colors for TV, sound, and working with a team of people including your camera assistant.

How to Become a TV Cameraman

Becoming a television cameraman is more about who you know in the industry, and you will probably need to start out at a small production company or network operating a standard television broadcast camera shooting studio TV like the news broadcasts. After you have been doing this kind of static work for a while, you can move onto bigger and better things and soon you can be out in the field doing more creative camera work, or you can switch to TV dramas, reality shows, and even documentaries. Most camera operators work on a freelance basis when you get to a certain level in the industry, but are regularly hired by the same production companies that have you on their database.

The D.O.P receives a very good salary as a freelance worker and will get a large sum of money shooting TV shows in studio and location. As an entry level cameraman, you will get a set salary working on the news and other small broadcasts. This salary will depend on the network or production company, the area and whether you belong to a union or not, but will be anywhere between $25,000.00 and $80,000.00 per year. Working at freelance rates, shooting things like sports, a TV camera operator can earn about $500.00 per day, while high end TV shows, can see you raking in $1,000.00 per day.