Are you a voter? Do you know much about the government? Are you keen to be the voice of the people? Why not be a politician?

A politician or political figure is an elected government official. They represent the voice of the people at all levels of government – local, state, and federal. It’s the politician’s job to influence public policy and make the best decisions for their constituents.

Politicians are public servants who serve in a public position that puts them in the spotlight at all times. It’s non uncommon to see the face of a politician in political ads on TV or in print, making a public speech, or amongst the people. Their public visibility is directly related to the elected position that they hold. 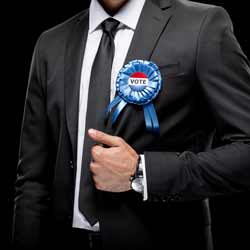 Politicians can hold many different roles, such as city council, mayor, congress person, sheriff, governor, school board member, planning committee, Senator, or President of the United States. Even though they are always dealing with political issues, their exact job description depends on their elected position and location.

Typical political issues involve laws, budgets, taxes, public needs, wilderness areas, gun laws, zoning, roads, benefits, health care, disasters, or other big-ticket items. To make the right decisions, politicians must learn about the issues, work with researchers and speech writers, respond to the media, and do their best to represent their constituent’s demands in an unbiased fashion.

Beyond political issues, politicians supervise administrators, analyze issues, discuss and make decisions, meet constituents, attend meetings, run expensive campaigns, and make negotiations. They also must work with their political party, such as Republican or Democrat, as a team to achieve larger goals.

Politicians must be natural leaders with outstanding people skills. They need to have a certain charisma that impresses people. Listening to people is a major part of the job. As is the ability to get things done honestly and in a timely manner. It takes the right type of person to become a politician who can hold their head high at all times and stand for a worthy cause.

If you want to be a politician, you must first understand government and political issues. Many politicians come from a background as an attorney, business person, or veteran, but any backgrounds are welcome in this arena. It’s best to break into politics as a volunteer. Volunteers are essential for a political campaign to be successful. Volunteering also gives you insight into the world of politics so you can determine your own future political path.

Most politicians aspire to climb the political ladder. To do this they may start as a small town mayor before becoming a state governor or even a Senator. It’s important to align with a political party throughout this process. As you can imagine, it’s a very competitive field. Mudslinging and bad mouthing are common during election season. Usually, politicians need to have a clean background if they want to be successful. Once elected, politicians can make between $30,000 and $100,000+ per year. Pay depends on their elected position, experience, and location.

Politicians have a big job. They represent you. They are your voice in the greater arena of politics. Because they are elected positions, it’s up to you to learn the niche, be a part of your community, promote yourself, and get elected. Then you potentially have the power to make changes that matter. Being a politician isn’t all glorious work, but honest politicians are in demand.

Are you ready to make a difference in your community or country? Then you should become a politician.