Who’s your wrestling hero? The Rock, Chris Jericho, Rick Flair, Steve Austin, Hulk Hogan, Jesse Ventura, Kane, Randy Orton, and Eva Marie are all household names amongst wrestling fans. These over the top characters have made their living by being professional wrestlers.

Professional wrestlers combine acrobatic maneuvers, physical feats, character development, acting skills, athleticism, and showmanship to create a scripted performance that fans love. Professional wrestling started in 19th century Europe and has grown into a multi-million dollar entertainment business that caters to sold out arenas and loyal fans from around the world.

Professional wrestling is a carefully choreographed and totally scripted performance that sets a protagonist against an antagonist in the wrestling ring. After flashy entrances and a bit of showmanship, wrestlers donning intimidating costumes face off with each other in the ring where they wrestle for the crowds. 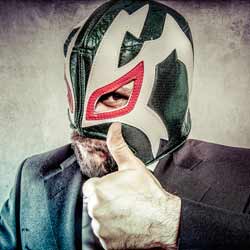 In the ring, professional wrestlers make a name for themselves through their acrobatic feats and commanding wins or losses. The referees direct the action and the wrestlers act out choreographed moves mixed with a bit of improvisation. It takes a lot of teamwork to create a flawless performance. Unfortunately, the injuries are often very real.

Everything that happens in professional wrestling comes from writers and choreographers working hard behind the scenes. These writers craft the lives of the professional wrestlers both in the ring and in the real world. And fans from around the world love it.

To become a professional wrestler you need to get in shape, develop your acting skills, and boost your presentation skills. There are dedicated development centers and wrestling schools for both men and women who aspire to be professional wrestlers. Look for a school that has produced successful wrestlers and has quality coaches.

Most wrestlers get their start wrestling with smaller, local organized leagues in the US, Mexico, Japan, and other countries. Try to avoid backyard wrestling opportunities, as they are generally unsafe. While building your wrestling career, it’s up to you to promote yourself, develop your character and costume, build a fan base, and of course get some wins.

During this process, be sure to build a website and get footage to create a highlight reel of your wrestling feats. If your character development is outstanding, your fan base is loyal, and your highlight film is impressive, you may have a chance to land a job in the big leagues – the WWE.

The WWE, or World Wrestling Entertainment, is a publicly traded company based in Stamford, CT. It’s run by the charismatic CEO, Vince McMahon. Over the years, WWE has taken over the wrestling industry. With the help of millions of social media followers and incredibly loyal fans, WWE tours the country and the globe putting on shows like RAW and SmackDown.

Besides WWE, there are hundreds of wrestling organizations where an aspiring wrestling can find work. It’s a year round job where success is based on your physical feats, your personality, your fan base, and your acting skills. Professional wrestlers work non-stop as their role plays out both in the ring and in everyday life.

Between promotional events, gym time, wrestling matches, and real life character development, wrestlers have a hectic schedule. These superstars can make anywhere from $25,000 to $1,000,000+ per year. Their income depends on the league they wrestling in, their following, and their success. Professional wrestlers can also make money from bonuses, merchandising, and promotions.

Do you have what it takes to get in the ring?