Despite its quirky name, the fishing town of Unalaska embodies the Alaskan experience. The city spans the Unalaska and Amaknak Island, a pair of volcanic isles in Alaska’s Aleutian Islands.

Unalaska has been home to the Aleut, or Unangan, people for thousands of years. They called it Ounalashka, a word which means “near the peninsula.” This word was later anglicized to become the official name of the city and one of its islands. 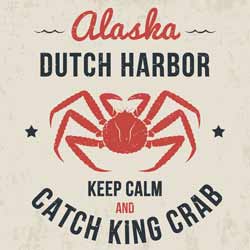 The Aleuts were initially resistant to the arrival of Russian explorers in 1759, but it soon became clear the intruders were here to stay. Unalaska became the Russians first permanent Alaskan settlement. They held power until the Americans purchased the territory of Alaska in 1867.

While Unalaska Island shares its name, today most of the city’s facilities, and its people, are found on Amaknak Island. This includes the famous Dutch Harbor, a site that’s regarded as the most important commercial fishing port in the United States. In fact, the site is so significant that the Amaknak Island portion of Unalaska often goes by the name, Dutch Harbor. For the past decade the port has taken in more seafood, and made more money, than any other dock in the country. Its success has much to do with its location at the heart of the North Pacific. It lies in the center of the West Coast and Pacific Rim shipping routes, and close to one of America’s most productive fishing grounds. The seasonal nature of Dutch Harbor’s fishing industry provides many opportunities for temporary work in commercial fishing companies and fish processing plants.

Professionals aren’t the only ones who can enjoy Unalaska’s impressive fishing opportunities though. Amateur anglers can fish for salmon, cod, dolly varten, and massive halibut in the local waterways. The salmon spawn in the Iliuliuk River, so it’s a great spot for fly fishing, while the Bering Sea is perfect for big game fishing. Dutch Harbor’s best fishing is enjoyed between May and September, and most tour operators don’t run outside these peak months.

Joining one of these groups is expensive, typically running between $150 and $200, but the staff will let you use their fishing gear, clean your catch, and even vacuum seal and ship it home for you. If you’d prefer to go it alone you can obtain a fishing license from local marine supply stores and supermarkets.

With two islands to spread out on, Unalaska has adopted an atmosphere that’s quiet and relaxed. It’s a place where you can stop and marvel at the majesty of nature, the vibrant colors of the summer wildflowers and the imposing peaks of local volcanoes. Adventurers can hike the same trails traveled by the indigenous natives, discover the area’s waterways by kayak, or camp out under the stars.

While you’re stopping to appreciate the little things, make sure you look to the skies. Unalaska is home to several beautiful and endangered birds including the whiskered auklet, tufted and horned puffins, eagles, and several species of seabird. Visit Mount Ballyhood, Pyramid Valley, and Summer’s Bay with your binoculars and camera in hand for the best bird-watching opportunities.

Unalaska is accessible by the air and sea. Cruise ships often stop at Dutch Harbor, but as they only dock for a day they never stay long enough to really get acquainted. Thankfully the State Marine Highway ferry also takes travelers to this picturesque part of the world during the warmer months. The vessel ferries tourists from Homer and Kodiak between April and October. If you hope to travel outside peak season you’ll need to take to the skies. Alaska Airlines flies to Dutch Harbor airport daily from Anchorage, while the regional Peninsula Airways connects Dutch Harbor to Atka, Akutan, and Nikolsi.

Unalaska isn’t serviced by buses or trains, but travelers can easily get around its islands using one of the many local taxi services. Visitors looking for a little more independence can hire a car from one of Unalaska’s two automobile rental companies, B.C. Vehicle Rental or North Port Rentals. A bridge connecting Unalaska and Amaknak Islands makes it easy for visitors to discover all that the city has to offer.