The Alaska Peninsula juts from the Alaskan coastline, extending almost 500 miles southwest to the Aleutian Islands.

The southern side of the peninsula is mountainous and craggy, while the northern part is much flatter with swamplands. The northern and southern coasts are also very different. The waters of Bristol Bay in the north are shallow and muddy, with extreme tidal differences. However on the Pacific side you’ll find deep, translucent water with little tidal variation. 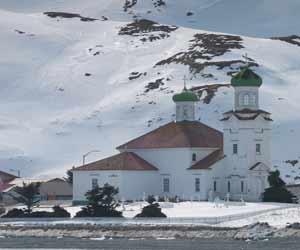 The locals see the animals and birds that live on the peninsula as some of its greatest natural resources. The fishing industry is vital to the region’s economic success. Amateur anglers and commercial fishing firms enjoy the salmon, rainbow trout, and other fish species that inhabit the area’s waterways, while hunters love the region’s big game. But animals are also respected and protected in this part of the world. The peninsula’s many wildlife refuges are home to some of the largest populations of native animals in North America. Visitors can look forward to spotting brown bears, moose, caribou, wolves, and an assorted of waterfowl and seabirds during their stay.

While the great outdoors are an important part of the Alaska Peninsula experience, most travelers will find they spend much time in the towns. These are organized into four distinct boroughs: Aleutians East, Bristol Bay, Kodiak Island, and Lake and Peninsula.

The cities you’ll find there are relatively simple, with basic amenities and essential facilities. However the warmth of the locals helps to make up for the lack of big city creature comforts.

Visitors to the Alaska Peninsula should prepare for relatively cold maritime conditions and some wild weather, particularly on the coast. Summer temperatures typically range between 45 and 60 degrees Fahrenheit, and fall to between 10 and 35 degrees during the winter. However the stormy weather and high winds experienced on the coast can make these areas feel much icier. Dressing in layers, even in summer months, is the perfect way to protect yourself from the Alaska Peninsula’s unforgiving, and often unpredictable, climate.

The Alaska Peninsula appears very isolated, but it’s surprisingly accessible to tourists. Alaska Airlines and PenAir both run regular flights from Anchorage to the cities of King Salmon, Dillingham, and Dutch Harbor. Tourists can also travel to Chignik on the Alaska Marine Highway ferry system during the warmer months. However the ferry only makes one or two stops at the coastal region between April and October, so your journey will require some prior planning.

Without any bus or train networks, getting around the Alaska Peninsula can be more difficult than arriving. There are some taxis available, but as they’re also in short supply most visitors hire a car during their stay. The road network is somewhat lacking compared to much of Alaska, but jet and air taxi flights can also help visitors travel from one Alaska Peninsula township to the next.