Gillnetting is a harvesting technique employing fine-filament nets that are set like a giant badminton net across the path of migrating salmon. The top edge is held up by floats, and the bottom is pulled down by a heavy lead line forming a wall in the water that entangles fish by their gills.

There are two basic gillnetting methods, “set” and “drift” gillnetting. Set gillnets are commonly used along the shorelines near the mouths of rivers in remote areas of Alaska. Natives and rural families use set nets for subsistence fishing, but the technique is less commonly used by the commercial fishing industry; JobMonkey focuses on drift gillnetting.

Drift gillnets are lowered off the stern or bow of a boat and allowed to drift freely in deep water, entangling fish that swim into them. A single “set” may last anywhere from a few minutes to the better part of a day, depending on currents, the weather, and the number of fish being caught. The net is slowly pulled in when the floats along the top begin to jiggle vigorously. The entangled fish are pulled up and shaken out of the net and then thrown into the hold. The net is then reset, and the process begins again.

Gillnetters are recognizable by the large drum, which looks like a giant spool, mounted on the stern or bow that sets and retrieves the net. In Bristol Bay the drum is kept on the back (stern) of the boat.

Those seeking gillnetting positions should concentrate their efforts on Southeast, Prince William Sound and Kenai Peninsula, and Bristol Bay (Regions 1, 2, and 5).

In Southeast, the gillnet season runs from early July to mid-September, but job hunters should arrive in late June. The most common way to find work is by “dock stomping,” walking around the docks and asking if anyone has deckhand jobs to fill. Also, try posting note cards with your name, qualifications, and contact information on bulletin boards located around harbors and in town. Mention any mechanical or cooking experience, express your willingness to help with pre-season preparation, and agree to take a partial crew share for an opening or two while you learn.

The Department of Fish and Game tightly regulates all commercial fishing openings in Alaska. They allow gillnetters to fish anywhere from zero to seven days a week depending on region, number of fish caught, strength of salmon run, etc. The duration of an “opening” is usually either 12 or 24 hours. Between openings, fishermen make repairs, prepare for the next opening, rest, and enjoy the beauties of the region. Inexperienced gillnetters usually earn about five percent of the boat’s gross income, while experienced deckhands make between 8-12 percent, which usually works out to between $4,000 and $7,000 for a two-month season. 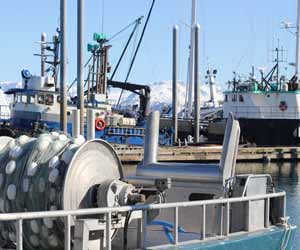 Gillnetting was once central to a raging controversy. Huge, miles-long drift gillnets were used by Asian fishing boats, indiscriminately killing all sealife in their paths. These nets were recently banned by international treaty, but the damage they caused continues to adversely affect marine life populations, including Alaskan salmon runs.

The gillnets used by U.S. fishermen in Alaskan waters are much smaller and more discriminate.

Bristol Bay has traditionally been the most lucrative gillnetting region in Alaska, with typical crew shares ranging between $6,000 and $12,000 for a six-week season. However, over the last couple of years they have experienced a dramatic decrease in their summer harvests.  Also, transportation to and from the region is expensive, so traveling to Bristol Bay in search of a first gillnetting job is not advised. Furthermore, working with speed and efficiency are the keys to a profitable season, so greenhorns have a more difficult time getting hired. On the other hand, finding a first deckhand job is sometimes only a matter of perseverance and luck, so anyone with cheap transportation to Bristol Bay (e.g., via an onshore or floating processor) should look into the job market.

Method: drift net – fish swim into net and are caught by the gills

Hours: long for two to three days, then a few days off

Pros: good-sized crew shares, a lot of days off

Cons: long hours, somewhat difficult for greenhorns to get jobs

For more information about gillnetting and commercial salmon fishing jobs in Alaska, go to AlaskaJobFinder.com.