The four methods most widely employed to catch Alaska salmon are trolling, drift gillnetting, set gillnetting, and purse seining. Set gillnetting is usually a smaller operation and rarely employs workers from the Lower 48; JobMonkey focuses on the other three methods.

For an interview with someone who has worked on a fishing boat, click here. 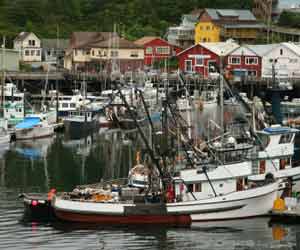 There are two types of trolling fishing vessels operating in Alaska waters: power trollers and hand trollers. JobMonkey focuses on power trollers because it’s hard to make much money working on a hand troller as the work is done by hand and is not very efficient.

When trolling, four stainless steel wires – each of which branches into 8-12 leaders equipped with lures, bait, and flashers – are dragged from a slow-moving boat. The wires are brought in periodically by heavy-duty reels called “girdies.” Each leader is then pulled in by hand and checked for fish. All fish caught are gutted, cleaned, and iced in the boat holds until off-loading. A fishing boat deckhand and a skipper may work 17-hour days for a month straight, unless driven in by a severe storm, or a closure forces them to stop. Trolling work isn’t very physically demanding, but the hours can be tedious.

Trolling is considered an art by many fishermen, because skippers must always consider which type of lures and bait to use, how deep to drag the lines, how fast to run the vessel, and where to fish. Working with a skipper who has several years of experience and a knack for finding fish is obviously an advantage.

Trollers are distinguished by the paired outriggers and long poles secured in the vertical position, well above the top of the vessel when not in use.

When the vessel is fishing, the poles are extended at a 45-degree angle to each side, allowing the four fishing lines to be spread out.

Trollers are only permitted to fish in Southeast Alaska (Region 1).

Most trollers are operated by a skipper and a single deckhand, known as a boatpuller. A boatpuller’s responsibilities include cleaning and icing fish, running the gear on one side of the boat, fixing broken tackle, standing wheel watch, and sometimes even cooking.

The best way to find trolling work is to arrive before the beginning of a season (mid-late June) and walk the docks to try to meet skippers. If you find a skipper you think you could get along with, offer to help out with the pre-season preparation in exchange for a trolling position. Remember, you will probably be the only other person on board, so be as selective as possible.

Type of fish caught: all five species of salmon – mainly king and coho

Pros: an art, exciting, more of a sport