Working Outside at a Seafood Processing Plant

Tender boats operate a little differently, often packing fish into iced plastic crates which are later lifted by a small crane. Beach crews sort fish into rolling bins according to species before taking them to the processing line. 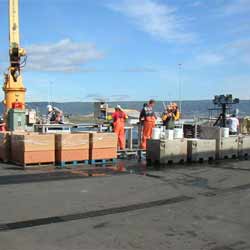 Ice and bait: Some plants supply tender boats (which often work for the plant) and other fishing vessels with ice, bait, and other things like soda pop, groceries, and other necessities. Ice and bait are sometimes supplied free of charge to vessels.

Inside Work at an Alaska Processing Plant

Britestacks: After cooling, cans are sent via conveyor belt to a warehouse area where a machine, generally a big magnet, palletizes them. Several employees work in this noisy environment. One operates the machine, making sure cans end up in the holding area right-side up, while another employee assists. Two other people stack and move the filled pallets.

Night clean up: Many plants operate on a 24-hour schedule. Workers process fish during the day, and in the evening they thoroughly clean the plant. The crew spends a lot of time hosing down bins and slime lines, cleaning machinery, and doing other tasks to reduce the risk of fish contamination.

Forklift driver: This is a rather specialized position. Pallets, boxes, and heavy ice-filled bins need to be moved by a forklift. Usually only the most experienced employees can hope to get this job.

Truck loading: This is considered to be a warehouse position. Boxes and crates are loaded into trucks and vans which take them to container ships or the airport for shipment.

Office staff : Positions in the office may include reception, accounting, payroll, filing, and order processing. Office staff also put in long hours, and these positions are usually filled by local residents or returning employees. 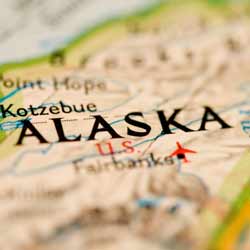 Canneries and fresh frozen plants make additional profits from the sale of salmon roe (eggs), usually to Japanese or other foreign-owned companies. In many Asian countries, salmon roe and caviar are in high demand. On the grounds of almost every plant, you will find what is often referred to as the “egg house,” where the careful processing of salmon roe takes place.

Working in the egg room is less hectic than working on your average slime line. There’s often less noise, little in the way of fish guts, and it’s a bit drier. The work is quite monotonous, though.

Here’s a quick breakdown of the process: skeins of eggs (the long egg-filled sacs taken from the salmon) that have been removed by slimers are put into baskets and weighed, agitated in a sodium nitrate brine solution (in large stainless steel vats), graded by technicians, sorted into boxes according to quality and size, sometimes salted (for preservation and taste), and, finally, packed artistically into boxes for overseas shipment. The packing process is quite an art, actually.

Many egg houses also make caviar, which entails breaking skeins of eggs down into single eggs before packing. Workers are almost always supervised by a technician from each of the three or four foreign companies the cannery or fresh frozen plant is doing business with.

The technicians, called sujiko technicians, are present to supervise the enforcement of quality controls. Women are often given first shot at these positions because their hands are usually smaller, and thus better able to get at the eggs.

Employees assigned to the egg room should be prepared to stand at a table packing eggs into boxes for several hours during the work day.