Alaska waters supply our country – and the world – with an enormous quantity of fish each year. The state accounts for approximately 80% of the world’s salmon harvest and would be a top 10 producer of seafood worldwide if it were a country. With dozens of onshore processors in recent years and hundreds of commercial fishing boats of all sizes, the industry has produced record amounts. 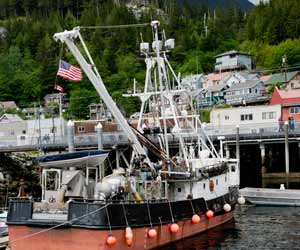 Before you dive headlong into this booming industry, it might help to have an idea of the path fish take from the sea to your table.

Vessels of all sizes – from small, independent boats to huge, company-owned factory ships – ply the North Pacific in search of fish. Salmon, halibut, cod, herring, and crab all are caught using different methods. Smaller boats without a freezer must off-load their catch frequently for processing, and usually transfer it directly to a land-based processor at the dock or to a tender boat, which in turn delivers it to a land-based processor or to a large floating processor.

Some of the large ships, such as factory trawlers or factory longliners, process and freeze their own fish right on board. Either way, the fish are cleaned, gutted, frozen, or sometimes canned, and distributed via freighter to the American mainland or to Japan, which is Alaska’s biggest buyer. In fact, most of the shoreside processors are owned by Japanese interests, and sale prices in Japan generally determine the price processors pay fishermen.

Before distribution and ultimate appearance on a Japanese consumer’s plate, the processed fish must go through an importer who pays duties and customs fees, a wholesaler who stores and markets the fish, a secondary processor who packages and delivers the fish, and a retailer who provides it directly to the consumer. Out of the $7 per pound paid by the Japanese consumer for sockeye salmon, less than $1 actually goes to the fisherman.