Most offshore workers, whether on a factory trawler or a small salmon gillnetter, are paid a percentage of their ship’s catch, called a crew share. Crew members on small fishing vessels such as purse seiners or gillnetters work exclusively for a crew share and aren’t paid until the end of the season, when they’re given a percentage of what the boat earns for its catch. The crew share varies quite a bit depending on the number of people and the size of the boat. Usually, the captain takes his share (typically 35-40 percent) and the remainder is divided among the rest of the crew after the cost of fuel, food, and other expenses are deducted. For example, a purse seiner with a five-man crew can typically catch $200,000 of salmon in a summer. At the end of the fishing season, the skipper pays each deckhand 10 percent, or $20,000, and deducts expenses worth about $3,000, leaving each crew member with $17,000. Gillnetters and trollers often pay a straight percentage (usually 10-15 percent) to their crew members, and pay expenses out of the boat’s share. 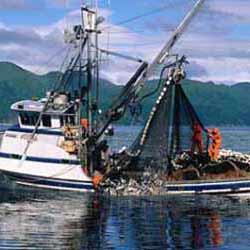 Workers on larger vessels such as floating factory processors or factory trawlers receive the bulk of their pay from their hourly wages, which are usually in the minimum wage ($10.85/hour as of January 1, 2023) to $18 per hour range plus time and a half for overtime ($16.27 – $27 per hour). Many processing companies also pay a bonus based on the amount of fish processed by the boat, or offer an additional 50-75 cents per hour worked as a bonus if the worker completes his or her contract. Most processors work huge amounts of overtime, often 20-40 hours each week, so their overtime and bonuses can often amount to more than their base wages.

Both systems of pay have their advantages and drawbacks. Crew shares offered by fishing boats offer the lure of potentially huge paydays at the end of the season, but a bad year or an inept skipper can also result in virtually no income at all. Processing work doesn’t usually result in a huge payoff, but the income is much more predictable.