An exorcist is a Roman Catholic priest who drives out evil spirits, demons, and devils from possessed people, places, and things. Exorcisms have been part of the religious world since the times of ancient Egyptians and Babylonians. Exorcisms still take place to day to save the tormented souls of the possessed. 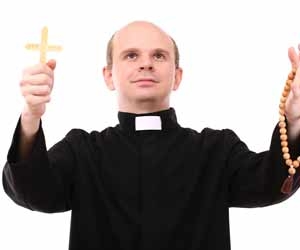 Hollywood has done a fantastic job of sensationalizing exorcisms through countless horror films. In reality, the Catholic Church recognizes very few real life exorcisms every year. Whenever someone claims they are possessed by the devil, a qualified Roman Catholic priest investigates the situation.

The investigation determines if the person is truly possessed. Signs of diabolical possession include speaking in languages they never learned, showing unnatural physical strength, knowing things they should not know, changing their voice, and being violent towards God and other religious references and relics.

Exorcists work alongside psychiatrists to determine if the problem is a mental illness or a true case of possession. The Catholic Church claims there are very few cases that actually require a proper exorcism.

An exorcism is not an exact science and no two exorcisms are ever the same. Dressed in a cassock, surplice, and violet stole, the exorcist recites the rites of exorcism in front of witnesses touched with holy water. The goal is to drive the evil spirits from the body they inhabit. With a bit of cooperation, a touch of patience, and a true devotion to God, exorcists are usually successful at extricating the demons.

To be an official, Vatican approved exorcist, you must be a Roman Catholic priest. This requires earning a bachelor’s degree, attending seminary school, and then becoming ordained. Many exorcists receive no formal training, but a recent push by the Vatican is changing this.

In 1996, the Vatican has backed the founding of the International Association of Exorcists. The organization holds biannual meetings and offers quarterly newsletters to its members to share exorcism stories, news, and tricks of the trade. In 1999, the Vatican rewrote the Rites of Exorcism – the first rewrite since 1614.

Now, aspiring exorcists can attend the Pontifical Athenaeum Regina Apostolorum. This is the educational institution of the Catholic Church, which offers classes on exorcism. These courses are designed to increase the number of officially trained exorcists. More exorcists are needed to battle the increase of Satan worship and cases of possession, but also to compete with unofficial exorcists.

Besides the Church-approved exorcists, many self-proclaimed exorcists will perform exorcisms for anyone willing to pay. This includes multiple person, televised exorcisms that are all about making money. These exorcists make a living performing exorcisms, but are not recognized by the Church.

Even though many people are skeptical of exorcisms and religion, being a Vatican blessed exorcist is a very real job. If you’re a holy person and are actively seeking a career as a priest in the Roman Catholic Church, then why not save the souls of the possessed too? Are you ready to become an exorcist?