Jobs with the FAA run the range from safety inspectors to air traffic controllers to program managers, computer programmers and administrative assistants. With nearly 50,000 employees, there are many possibilities in dozens of different locations across the country. For current FAA job listings, see the JobMonkey Job Center. At the time of this writing, one of the most critical FAA job needs is Air Traffic Controller. 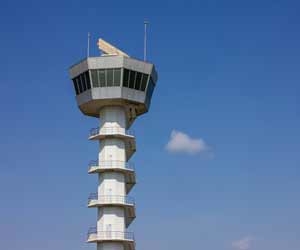 There are certainly other aviation jobs with the FAA and other agencies, as well as privately owned companies, for which you can apply.

Most of the flying public never sees or thinks much about Air Traffic Controllers, but these people are vital to the safety of the aviation system. They not only provide directions to pilots at the airport for taking off and landing, they also help keep planes at a safe separation from one another during their entire flight, and orchestrate the complex dance of movements that keep aviation the safest mode of travel. They use a combination of flight plans, visual observations, and radar to keep the system running safely and efficiently.

Most controllers work either in enroute stations (where they use radar to observe the planes and provide guidance) or in towers at airports. Airport traffic controllers get the planes safely on and off the ground, and help them taxi to the appropriate gate.

Air Traffic Controllers jobs come with good benefits. First, the pay (averages around $118,400) and benefits are very good. Air Traffic Controllers also have the ability to work nearly anywhere in the world, from major cities to rural enclaves. Every major city has an airport that requires round-the-clock air traffic control, and in between every major city, enroute stations are managing thousands of flight through their airspace.

On the downside, however, Air Traffic Control positions are very stressful. The skies over the USA are crowded! There is simply no room for error in the ATC’s job. A brief lapse of attention can cost lives, and that knowledge, coupled with increased pressures to do more with fewer people, contributes to a high-stress work environment.

Another potential downside is that controllers do not change locations very often: each tower or enroute station has its own complex procedures, so even though you may become highly skilled in one location, moving to a new location would mean starting all over again.

The basic FAA requirements for Air Traffic Controllers are: