As employees of the FAA, air traffic controllers coordinate the flight patterns of all aircraft in the sky at any given time. It is their responsibility to make sure airplanes stay on the routes they have been cleared for and that aircraft remain a safe distance apart. They are also responsible for coordinating the traffic of incoming and outgoing flights from airports. 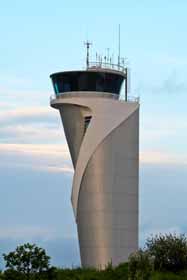 If you’re looking for a mental challenge that far surpasses any Sudoku game, have a high tolerance for stress, and don’t mind an exceptionally-long training program, an FAA job as an air traffic controller may appeal to you. Each day, air controllers guide more than 90,000 flights in the skies in the United States. That’s a lot of flights, and not all those airplanes are big commercial airliners flown by industry giants such as American or United. At any given moment, roughly 5,000 planes are in the skies above the United States. In one year, controllers handle an average of 64 million takeoffs and landings.

In the past, nearly all civilian air traffic controllers worked for the FAA. In the wake of the 1981 PATCO strike, the FAA decided to contract out operation of some of its smaller air traffic control facilities. The program has grown over the years, and there are now many privately-operated control towers.

Most air traffic controllers belong to a union, and NATCA is the largest controllers union in the U.S.

According to the Bureau of Labor Statistics (BLS), the number of ATC jobs is expected to grow through the year 2018. Most of this growth is not due to the increase in air traffic (technological advancements are allowing the same number of controllers to handle more traffic), but to the fact that the majority of current air traffic controllers are approaching retirement age. Jason M. Cristaldi, NATCA President at Long Beach Tower, says that the government is far underestimating the number of upcoming retirements and overestimating the availability of qualified candidates to take their places. Cristaldi wrote in a letter to the editor of the Long Beach Press-Telegram, “Today trainees are waiting up to 16 months [to get into an FAA-approved training program], and this current environment and low pay system has led to a record number of trainee resignations.”

Cristaldi went on to say, “A retiring workforce combined with increasing traffic means a heavier work load for an already fatigued work force. It’s no wonder that six controllers per day have been retiring since Jan. 1.”

NATCA President Patrick Forrey wrote in a press release that an additional 2,200 experienced controllers were retiring soon, thinning the already-depleted ranks of the workforce at a “time when the skies have never been more congested. The GAO has already stated that the risk of a catastrophic accident on our runways around the nation is high. Without an adequate amount of rested, well-trained controllers in towers and radar facilities, the risk of an aviation accident now includes the airspace as well as the ground.”

The current conditions certainly indicate this will be a high-need field where a qualified and properly-trained candidate should be able to find a job in the location of his or her choice around the U.S. The challenge is getting through the rigorous and extensive training program. As Cristaldi mentioned, waiting lists for these programs require patience, prior planning, and determination. The drop-out rate at many of the training programs is also very high. Then, once the successful candidate is hired on, on-the-job training begins. Cristaldi wrote that it took him nearly four years to be considered a fully-trained air traffic controller. As an ordinary passenger, that long training process is very reassuring. However, as a potential air traffic controller, the long wait may be a turn-off to many, especially considering that there is a time limit: the FAA will not hire new ATCs older than 30 due to this job’s younger-than-average required retirement age.

Air traffic controllers monitor air traffic at all phases of flight, from takeoff and ascent, through the bulk of the ride across multiple control areas, and finally seeing them safely back to the ground. Using radar and other technology, controllers have a master-view of the skies, and they use this perspective to make sure the planes observe a safe level of separation from one another and have the safest flights possible.

Air traffic controllers know that the nature of their work simply does not allow error. Mistakes, or a lapse of attention, can cost lives, and it can happen in seconds. This, plus the increased amount of air traffic and the declining numbers of trained air traffic professionals, contribute to a high-stress environment.

To become an air traffic controller, a person must complete an FAA-approved education program; pass a pre-employment test; receive a school recommendation; meet the basic qualification requirements in accordance with Federal law; and achieve a qualifying score on the FAA -authorized pre-employment test. Candidates also must pass a medical exam, undergo drug screening, and obtain a security clearance before they can be hired.

The FAA recognizes these 14 programs offering a degree in aviation administration with a concentration in Air Traffic Control: