Are you fascinated by outer space? Do you gaze up at the twinkling stars and bright planets in the night sky to spot shooting stars, watch meteor showers, photograph lunar eclipses, or to find constellations? If so, then maybe you should become an astronomer.

Astronomers are scientists who study the universe. Astronomy is one of the world’s oldest natural sciences. It’s a mix of physics, mathematics, and a curiosity for outer space. By focusing on the laws and properties that govern space, time, energy, and matter, astronomers strive to determine how the universe works.

Astronomy is a massive scientific field, which is why astronomers focus their research on a specific niche such as planets, moons, stars, asteroids, comets, distant galaxies, celestial bodies, black holes, space travel, solar systems, quasars, the evolution of the universe, or other mysteries of deep space. Astronomy research has the potential to make a major impact on everyone’s life. 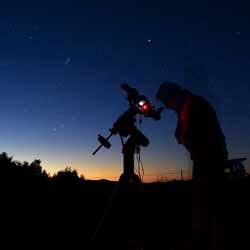 Ever since Galileo, astronomy has led to major breakthroughs that change the world including weather forecasting, navigation, space exploration, calendars, atomic theory, time, satellite communications, discovery of new planets, and even military technologies. All of these advances in technology start with simple research and observations.

Astronomers spend their days collecting data, using instruments, developing software, analyzing reports, formulating theories, making observations, and conducting research. Their constant thirst for knowledge about everything from galaxies to atoms drives them to learn more about what lies beyond planet Earth.

Like all scientists, astronomers are researchers at heart. Astronomers write papers and publish their findings to share with the world. Their work may be a solo effort or the work of a team. In the process, they log a lot of late nights observing the dark skies testing theories, measuring the chemical composition of space objects, creating orbiting spacecrafts or rockets, designing satellite radios, taking high definition images of asteroids, and playing with “toys” like particle accelerators, gamma ray telescopes, electron microscopes, or even the Hubble Space telescope. What they see is literally out of this world.

It’s not an easy road to become an astronomer. You need to earn a degree in astrophysics, cosmology, mathematics, physics, or computer science. Then you must earn a Ph.D. in astronomy from one of the focused degree programs in the United States. During this time you will focus your studies on an astronomy niche like planetary science, solar astronomy, evolution of the universe, or distant galaxies. Choose one that piques your curiosity, as your education will take 5 to 7 years to complete.

After you have your astronomy degree, you can find an astronomy job where you will split your time between office work, laboratories, and observatories. The majority of all astronomers work at universities and colleges as teachers and professors.

There are also astronomer jobs with organizations in the federal government like the US Naval Observatory, NASA, or the US Department of Defense. The aerospace industry and other research organizations hire astronomers too. There are even jobs at observatories, planetariums, and museums. Astronomers can find work both in the US and abroad at different astronomy facilities.

On average, astronomers make over $95,000 per year. The American Astronomical Society estimates that there are about 7,000 astronomers working in North America. That’s a relatively small group of scientists, which means both camaraderie and competition.

If you’ve ever asked questions like: How old are the stars? When did the universe begin? How many galaxies are there? Do aliens exist? Or why do planets have rings? then consider pursuing a career as an astronomer. Maybe your next discovery will change the world.