If you love living on the edge, a job as a bush pilot might be the one for you. Imagine flying rich people to private islands in the Caribbean, dropping off backcountry skiers on remote glaciers and mountains in Alaska, bringing a load of food to backpackers in Australia, taking hunters to an isolated hunting lodge in the African Bush, or picking up fisherman from an inaccessible fishing spot in Patagonia. It’s all in a days work as a bush pilot. 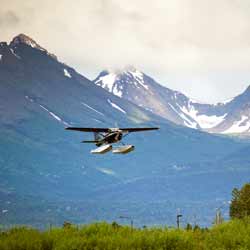 Bush pilots are always pushing the limits. They are flying into remote airstrips in literally the middle of nowhere. It’s got to be quite a rush when you land in some far-flung backcountry setting in places like Africa, Alaska, Canada, Australia, or Siberia where you’ll be landing and taking off on variable, natural runways – think lakes, glaciers, gravel beds, and dirt strips. Bush flying is the real deal. Check out Alaska Guide Services for a list of prospective employers – hunting and fishing outfitters by region.

Bush pilots have to be in tune with their planes, environment, and objective.

They fly small to medium propeller powered planes with large tundra tires, skis, or floats. There are never lights on the runways and usually nothing around to even set the vast wilderness to scale. To be a bush pilot, you need a commercial pilot license – roughly a $10,000 investment. Next you can take a bush pilot course, but it is unnecessary. Nothing will make up for hours logged and flight experience. Many pilots use bush flying as a way to log hours so that they can make it to a higher paying commercial pilot job. Others get hooked on the pure adrenaline and adventure of flying.

In order to have a long successful life as a bush pilot, you have to keep your skills sharp. As in any backcountry setting you must have basic survival skills. You also need to be able to repair your airplane. It’s a big machine and all sorts of things could go potentially wrong – things that a roll of duct tape and crossed fingers won’t fix. Most importantly you need to know how your airplane will perform. Flying in remote locations often means quickly changing conditions, and mountain weather. You’ll need to know about navigation, cockpit instruments, FAA rules, and much more.

The bush is wild. Be sure to buckle your seat belts because bush pilots have reported some crazy things from the far-off regions of the world – lions eating their plane tires or birds crashing into windows are just a start. They call it the wild for a reason.

Being a bush pilot takes a certain breed of person.

Bush pilots can find work at hunting lodges, fishing lodges, sightseeing flights, or as an air taxi operator. Usually you need to own your own plane. Not many people are going to let you land their plane on a gravel bed next to a river. For putting your life at risk, you won’t make a ton of money. In fact wages for bush pilots vary greatly. The best pay is in Alaska, where an experienced pilot can make $350 a day or $6,000 a month. Other less experienced pilots may only pull in around $20,000 a year.

If you’re serious about spending your career in the air, seriously consider a job as a bush pilot. You’ll truly live on the edge of your seat when you fly in unpredictable conditions and land in spots that other pilots consider dangerous.

It’s a crazy job where accidents are frequent, but there’s nothing in life quite like a bird’s eye view of the Earth.

Quick Facts About Being a Bush Pilot