In the United States, you are innocent until proven guilty. When a person is arrested for a crime, they must first go before a judge. The judge listens to the evidence and determines what will happen in next. Depending on the crime, the defendant’s history, their threat to society, their flight risk, and other factors, the judge will determine that individual’s bail. Will they be released from jail until trial or remanded until trial?

If the judge grants that the person may be released, he will issue a bond order. Laws vary by state, but usually this is a cash amount that is determined by a bail schedule based on the misdemeanor or felony. Usually the bail amount is proportional to the crime committed. For example, bail will be much lower for vandalism than manslaughter. 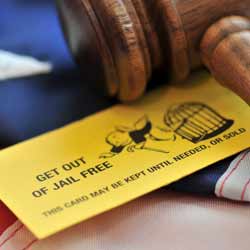 When the bond issued by the judge is paid to the court, it secures the release of the defendant and requires that they appear at all scheduled court dates. As long as the defendant makes every mandatory appearance, the bail bond is refunded in full at the end of the trial. Ideally, the defendant or his friends and family can post the bail. If not, they will call a bail bondsman.

After the legal paperwork is completed, the client will usual get out of jail within a few hours. The bail bondsman works with the client to ensure that he appears at all court dates. As long as all goes smoothly, the bail bondsman gets his money back at the end of the trial. If the client fails to show up at court, they are responsible for the full amount of the bond.

Usually the defendant is true to his word and appears in court as requested. It’s rewarding to see these individuals turn their life around. But in a job where you deal with criminals on a daily basis, anything can happen.

It’s not uncommon for a defendant to skip a court date. When this happens a judge will issue a bench warrant and the defendant becomes a fugitive. To ensure they get their funds back, bail bondsmen will hire bounty hunters or skip tracers to track down the fugitive and return them to jail. This also means the bail bondsman gets his money back.

Bail bondsman are a unique type of financial specialist that is almost exclusively in the US. To become a bail bondsman you must obtain a state issued bail bonds license. To earn a license you must complete educational classes and tests, have a clean criminal background, and submit to an FBI background check. Before you can begin this process you must find a job with a bonding company that will sponsor you.

This job is commission based – the more people you bail out, the better it is for business. Bail bondsmen can make $20,000 to $100,000 per year. Pay depends on your location, your reputation, and your network. It’s a risky business, but it can also be quite lucrative.

If you’re interested in this insurance niche, then consider finding a job as a bail bondsman. For the right person, it’s an exciting way to make a living.

Become a Baker (NEXT PAGE)