Do you enjoy sitting by a crackling fire, watching the dancing flames, and enjoying its warmth? Fireplaces provide heat for your home, but with fire comes responsibility. Without proper maintenance and cleaning, chimneys can become major fire hazards. When was the last time you cleaned your fireplace and your chimney? Most likely you need to hire a professional chimney sweep pronto. 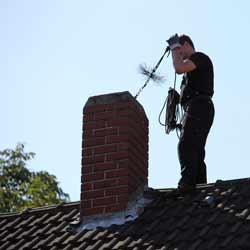 Chimney sweeps inspect, clean, service, repair, and appraise chimneys. It’s a real job, but it doesn’t consist of dancing on rooftops like Dick Van Dyke danced in Mary Poppins. It’s serious work to prevent fires. Today, there are around 5,000 chimney sweep companies in the United States that employ over 6,500 people as professional chimney sweeps.

Every time you enjoy your fireplace, smoke drifts up the chimney. It leaves an icky residue called creosote. Creosote builds up on the inner walls and corners of the chimney and eventually becomes flammable. To prevent chimney fires, it is recommended that chimneys are cleaned once a year or after 1/8 of an inch of creosote builds up.

Unfortunately people don’t look after their chimneys. Instead small problems are overlooked until they become big ones. Improper chimney maintenance causes over 25,000 residential fires each year. Those fires amount to over $100,000,000 in property losses. Regular chimney sweepings could have prevented those tragedies.

Chimney sweeps do house calls to inspect chimneys. Their goal is to prevent fires and increase chimney safety for all kinds of heating systems, wood stoves, fireplaces, and even industrial smokestacks. To do the job, chimney sweeps start the inspection on the roof and then work from inside the home. They look for residues and other deteriorations that could lead to problems. Typically inspections take between 20 minutes and an hour.

If the chimney needs cleaning, the chimney sweep brings out his equipment. He usually has rods, wired brushes, grinders, vacuums, ladders, and lights. He wears protective gear to avoid breathing soot and to allow him to safely walk on roofs. The equipment is used to scrub, suck, and sweep the soot and residue from all the hard to reach places inside the chimney. Sometimes hazardous chemicals are used if the creosote residue has hardened. This makes a several hour cleaning job become a multi-day event. For typical cleanings, chimney sweeps can do about 4 per day.

Surprisingly chimney sweeps do a fantastic job of not leaving dirt and debris inside homes. It is definitely a dirty job though – one that’s been featured on Discovery Channel’s Dirty Jobs. Besides cleaning and servicing chimneys, chimney sweeps also install caps on chimneys to prevent birds, animals, rain, and other hazards from entering the home through the chimney.

Chimney sweeping is an unregulated profession, so when considering a career as a chimney sweep be sure to get recognized training. Organizations like the Chimney Safety Institute of America offer nationally recognized certifications and chimney sweep specific education that teaches about chimney construction, energy, fire protection, and chimney cleaning.

It is a good idea to receive on-the-job training or undergo an apprenticeship with an experienced chimney sweep before you venture out on your own. When you’re preventing fires in people’s homes you want to make sure you know what you’re doing. Liability insurance is an excellent idea for anyone pursing this career.

How many chimneys are there in your neighborhood? Everyone with a chimney needs a reliable chimney sweep for house calls. Maybe that chimney sweep could be you.