Have you ever watched a film about climbing distant Peruvian peaks? Polar bears hunting seals in the frigid Arctic? Extreme skiing in Alaska? Explorations of the tropical Amazon jungle? Loggers in the Canadian wilderness? If so, you’ve seen an adventure filmmaker’s work. 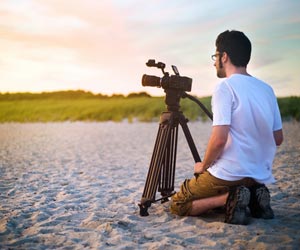 Adventure filmmakers make documentaries about adventures. They film nature, wildlife, adventure sports, and expeditions to the remote regions of the world. They travel to places that are barely on the map with only a camera and an idea. They bring back stunning scenery, thought provoking ideas, unique views of life, and gripping shots of reality.

Adventure films have international appeal. They highlight ideas, regions, species, and sports that many people would never have thought about – ski traverses to the North pole, life on an Alaskan fishing boat, surfing the coast of Patagonia, avalanche training in British Columbia, climbing in Yosemite, or base jumping from tall buildings. They bring people, places, and the world to everyone. Adventure films are cinematography at its very best.

Making these films is a creative process. It starts with an idea and develops into an adventure. Filmmakers travel on expeditions and participate in extreme sports to get the shots they need. They are a part of every film they make and their passion shines through the camera. They travel to amazing places to do fantastic things.

Filmmakers are at risk when filming in a down suit on the summit of K2, dangling out of a helicopter over the ocean filming humpback whales, or perched near a cornice filming a first ski descent. Filming gives him the sense of being alive. Besides the opportunity to go places, it’s the danger of the job that makes the adventure.

Adventure filmmakers are fueled by adventure and most have a passport to prove it. Filmmakers must be creative when they plan films. They think about angles, shots, time lapses, risks, narratives, and much more. They need to lug cameras up couloirs and chase storms. The filmmaker must film, edit, write, and complete their films. Every film they make becomes part of their portfolio – a breathtaking portfolio will help to launch a brilliant career. Entering film festivals like the ones in Telluride or Banff is one of the best launching pads for new filmmakers.

Most adventure filmmakers earn a film degree from a university. A newer trend is to attend a school, like Serac Adventure Film School. These schools teach adventure filmmaking from experienced professionals in places like the Teva Games, Bhutan, Machu Picchu, or Mt. Kenya. This hands on training develops skills and networking contacts.

Talent dictates success. That’s why the pay range is so great. A freelance filmmaker may make $15,000 a year, while a developed filmmaker, who puts his neck on the line to film great white sharks for a major cable network may make $100,000 per year.

Documentary films are the nature videos, the ski flicks, the reality TV shows that blow your mind. They inspire you and you watch them over and over again. Adventure filmmakers take armchair travelers telemark skiing in the fjords of Norway, hiking in the Canadian Rockies, mountain biking in California, or fly fishing in New Zealand.

Can you make a film that takes the audience on a gripping adventure to places they never imagined?

Become an Allergist (NEXT PAGE)