Teaching English in the Czech Republic

The Czech Republic, primarily Prague, is still a rather popular destination in Eastern Europe for young Americans, although it is in fact considered to be situated in central Europe. 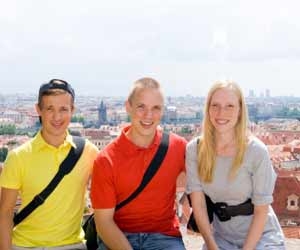 Some estimates put the number of American expatriates in Prague at 20,000, though only about 2,000 are officially registered with the government.

It used to be that Prague was considered the “Paris of the nineties,” but this was very soon after the fall of Communism in 1989 when Westerners began to discover what beauty and Bohemian exoticism this city held. There continues to be a thriving expat community, but not nearly as explosive and dynamic as it once was. This is in part due to the claws of consumerism digging into a nation that joined the EU only in 2004, an action that has begun its integration into a more uniform and Western mentality. And January 1st of 2008 saw the entry of the Czech Republic into the Schengen Zone, causing even greater ease in travel for Czechs, but also triggering a mass exodus of expats due to increased visa requirements for non-EU citizens. Presently, there are an estimated 35,000 American expats living in Prague, though only a small percentage are officially registered. But with the new Schengen laws, this number is bound to decrease over the next couple of years.

Situated in the heart of Europe, the Czech Republic lies at the crossroads of the new Europe, brought to life after the revolutions of 1989.

The right-leaning government of the two Vaclavs – President Havel and Prime Minister Klaus – quickly brought the country to the forefront of the reform movement in Eastern Europe in the early 90s. Now Vaclav Klaus is the nation’s president, with Petr Necas as Prime Minister. Most of the young Czechs you will meet tend to dislike Klaus for his conservative views. Economic shock therapy has been their answer to making the transition to a market-oriented economy. Arguably, they have been more successful than any of the other governments in the region. The Czech Republic’s government has been relatively stable, its low foreign debt is the envy of its neighbors, and its May 2004 entry as the first Eastern European member of the European Union has showed the country to be up to the task of a smooth integration with its EU neighbors in the west.

The signing of an agreement with the U.S. to build an anti-missile radar on a military base 90 km south of Prague has had the country in an uproar, since resistance to the radar was at 70%, a nationwide resistance that was completely overlooked by the Czech government.

Initially, it was relatively easy for Western investors to get involved in developing the country’s infrastructure.

Consequently, many Western business people, particularly Germans and Americans, have made profitable in-roads into the Czech Republic.
But things are slowly changing, and regulations for foreign investors are getting tougher.

The cost of living remains low in the Czech Republic by Western standards, but is on the increase compared to the rest of Eastern Europe. Inflation has been kept under control to a much greater extent than in Poland, Slovakia, or Hungary and unemployment is the lowest in the region. In recent years, the Czech Republic experienced a rise in the costs of food and drink and pretty much everything else that can be purchased. For expats who may venture over on the quickly sliding dollar, earning in Czech crowns is the best solution to this change in cost of living that has always been the draw.

Though it’s likely that the governments of Central and Eastern Europe will eventually begin to clamp down on foreigners who want to live and work in their countries, the Czech Republic stands as one of the more inviting places to settle. Americans are treated well, and the Czech government still seems amenable to their continuing presence. The Czech government seems to recognize the need for foreign financial and intellectual involvement in its drive toward a burgeoning free-market economy. A young American who ventured to Prague and ended up staying for several years remarked:

“The Czechs are generally friendly toward Americans, especially when compared to Germans and other Europeans. Prague is easy and relaxed. Even for white-collar people, it’s an enjoyable place. It’s a new market – 13 million people in the Czech Republic. And just look at the map. Prague is so central.”

In recourse to the stricter visa requirements for Americans, the US government is finally making efforts to allow Czechs an easier entry into the US, possibly even lifting the need for a visa at all.

Because Prague is such a popular destination, you can expect to run into other native English speakers on a regular basis. Sometimes it seems that there is more English or German spoken on the streets of Prague than there is Czech. It is easy to understand why this could be viewed as either a plus or a minus. If you like to know that many of your compatriots reside nearby, then Prague could be the place for you. On the other hand, you might be turned off by the prospect of being lumped together with countless other Americans and dealing with the opinions many Europeans have about people from the United States.

It’s clear from spending time in the four countries covered in this site that the Czech Republic has the most opportunities for foreigners to work. The demand for English teachers is still on the upswing and the opportunities afforded Americans in other fields are more numerous than in Poland, Hungary, or Slovakia.

Jobs in Slovakia (NEXT PAGE)