Many Alaskans have long been hoping for what could be another Prudhoe Bay-sized petroleum project. The Alaska Natural Gas Pipeline Project — also referred to as Alaska Highway Pipeline Project — has been touted as the largest construction project ever in North America. At one time the state more or less endorsed the project, and TransCanada, together with ExxonMobil, started initial planning. Two other ‘competing’ pipelines also started planning or proposal stages. The state of Alaska stands to gain up to $3 billion per year in revenue for 30 years if the pipeline ever comes to fruition. The project would also mean thousands more jobs for both Alaskans and non-Alaskans…an economic boon. Of course, it also means more natural gas in time of short supply and high demand. To get an idea of the size and impact of the Alaska Gas Pipeline project we can look back to the building of the Trans-Alaska Oil Pipeline. 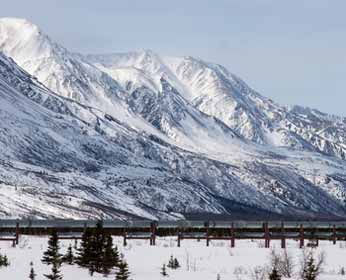 LOOKING BACK: THE TRANS-ALASKA OIL PIPELINE

On March 27, 1975, one of the largest single construction projects in the United States officially got started: the building of the Trans-Alaska Oil Pipeline in Alaska. On June 20, 1977, the first oil began to flow from Prudhoe Bay in the far north of Alaska to Valdez in the south. The pipeline cost over $8 billion to build — and that was in the seventies! As of June 2021 more than 18 billion barrels of oil had flowed through the 800-mile long pipeline.

It took approximately 70,000 workers to complete the work between 1968, when the initial planning work got started, and the end of the project in ’77. According to Alyeska Pipeline Service Company, which was created to oversee the project, there were 28,072 workers at the project’s peak in 1975. Many of these people lived in one of the 29 temporary construction camps. They flew in and out of 14 temporary airfields. 515 federal and 832 state permits were needed along the way. And 330 archaelogical site surveys were conducted before the building even got started. It was a massive project that provided a great many jobs to Alaskans as well as thousands of non-Alaskans.

For a full history of the Trans-Alaska Pipeline visit the Alyeska Pipeline Service Company website at:

On the website you’ll find facts, figures, a chronology of events, and glossary of pipeline related terms. It’s great background information and helpful in understanding the potential scope of the Alaska Natural Gas Pipeline.