The drilling industry plays a vital role in the search for crude oil and natural gas all over the globe and brings in millions and millions of dollars. The search for oil and gas would be pretty much futile without the drillers, who are among the first on the scene. The geologists and other scientists do their studies and theoretically ‘find’ the oil, then the drillers come in to prove the theory. Hopefully, the location chosen produces oil. 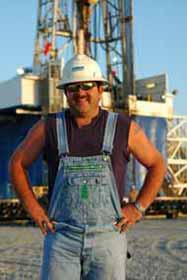 Drilling technology has evolved in order to get at the increasingly harder to find oil, and in a more environmentally friendly way. There’s the conventional method of vertical drilling, where you’re drilling straight down. Horizontal drilling is when you go down but then turn horizontally. Slant drilling involves drilling at an angle. For instance, if you wanted to drill under a lake, you could build a rig on the shore and bore several wells — from the same rig — at an angle under the lake.

Currently, oil and gas companies are flush with cash despite the worldwide shortage of oil. You know this if you’ve been watching the news or reading the newspapers. And a good chunk of company profits are going into oil production facilities and equipment so that more oil can be found. This is a change from the last ten to twelve years when very few new rigs were built. The number of new rigs under construction is, in some years, simply astounding.

It’s typical for one of the big oil companies to contract out to contractors who specialize in drilling, own the rigs, and employ trained staff. The drilling contractors just put the well where the company wants it.

Here are some quick statistics about oil rigs. According to industry research Baker-Hughes, a leading oil field services company, there are just over 3,000 oil rigs worldwide. Zeroing in on North America, there are 1,700+ rigs in the United States, 370+ in Canada, and 1,200+ internationally beyond the US and Canada. Get all your rig count information right here.

Lots of wells and not enough workers … A couple of huge problems facing the industry are a worker shortage and an aging workforce (average almost 50!). One petroleum industry consulting group estimates that it’ll take between 7,000 and 8,000 new workers to staff all the new oil rigs coming online in the next two years.

So the jobs are plentiful.

The vast majority of entry-level oil and gas jobs exist in the drilling sector, whether it be onshore or offshore. The best people for the jobs are those who are mechanically inclined, physically fit, able to work well as part of team — and drug free. In addition to more physically demanding, hands-on positions there are plenty of technical jobs that require at least an undergraduate degree. The industry is actively seeking people with Master’s Degrees in geosciences. If you’re in college and thinking about engineering, then think long and hard about being a petrochemical engineer. Finding a job when you graduate will be a snap!

This section will give you a basic overview of oil rigs and the types of jobs most often found on rigs. Visit www.OilJobFinder.com for more detailed rig job information.