Alberta, Canada’s oil sands have been in the news a lot, and were even featured on a 60 Minutes episode. Commonly quoted statistics indicate that Alberta’s oil sand deposits contain approximately 1.7 trillion barrels of bitumen, of which over 175 billion are recoverable with present-day technology, and 315 billion barrels are ultimately recoverable in the future once technological improves. The Athasbasca Oil Sands Deposit is, by itself, the largest petroleum resource in the world.
*These numbers vary depending on the scientist! 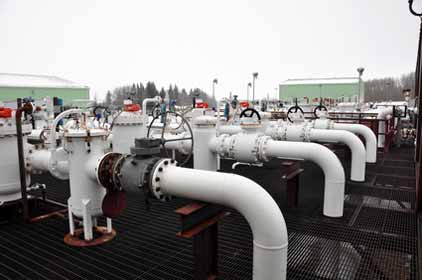 There is no consensus among geologists on the origin of oil sands, but many lean towards the idea that it evolved in organic Cretaceous shale deposits in the southern portion of ‘the Alberta Sedimentary Basin.’ Pressure from Underground forced the oil to soak into the existing silt-grade sediments and localized sand bodies of the McMurray formation.

Oil sands mining is quite different than drilling for oil far beneath the earth’s surface. In oil sands mining, a mix of oil and sand is removed from about 100 to 150 feet below the surface using heavy equipment. The sand is made up of sand, bitumen, clays, and water. Bitumen is the key ingredient. It is a black, asphalt-like oil which is very thick and gooey. The world’s largest dump trucks carry tons of the earth material to refining facilities where the material is mixed with warm water to separate the oil from the sand.

According to Syncrude, one of the largest oil sands companies, water makes up about 4% of the oil sand by weight. It encapsulates the grains of sand, keeping them separate from the oil. Without the water separation, the oil and the sand could not be separated by the water-based extraction methods presently employed.

The upgraded bitumen oil product is made up of naphtha, both light and heavy gas oils that are combined to make a light, sweet crude oil.

Once the oil has been separated it is transported via pipeline to refineries in Canada and the United States.