Technology is the most crucial factor for in upstream’s exploration and extraction. Advances in technology allow geologists to not only locate more oil fields, but it also allows them to access fields that were previously inaccessible. Technological advances in upstream have also allowed geologists and scientists to determine “dry” holes earlier, thus minimizing the wasted time and money to explore these places further. Upstream technology is also crucial to increase the total production of oil from existing wells. As the first phase in company’s strategy of oil profitability, the amount of oil that is found and extracted in the upstream sector has a direct effect on the amount of oil that can be processed and then sold in the downstream and midstream sectors. 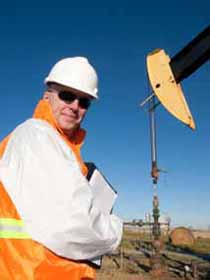 The upstream sector is where oil companies focus for growth. This implies that the more upstream resources an oil company has, the bigger the company is and the more profits it can generate. It is also imperative for companies involved in upstream is calculate and plan out the rate of extraction so the reserves do not go dry before appropriate profits have been accrued.

Jobs within upstream include any position with exploration or extraction. Examples include geophysicist, land analysts, platform supervisors, platform installers, petroleum engineers and pipeline construction engineers. Once the oil has been discovered and the proper extraction equipment has been moved into place, the oil must be moved to the proper refineries to be processed into market commodities.

Crude oil is a fossil fuel that is basically a mixture of hydrocarbons that have been formed from living organisms. To obtain crude oil, a large amount of organic matter is needed to supply the necessary hydrogen and carbon atoms. This organic material must be buried far beneath the Earth’s surface in order to prevent oxygen from destroying it.

This helps explain why the oceans are an abundant source of crude oil. When organisms in the ocean die, they sink to the bottom where their remains accumulate. Over time, their remains break down into hydrocarbons that are rich for the mining. Finding these reserves is another challenge in itself.

In order to find new oil reserves, companies would dispatch a team of geologists to conduct geological surveys over a given area. Crude oil underground is typically held in a cavern that geologists refer to as a “source,” “trap,” or “reservoir.” On the roof of the caverns are hard, dense material, that if absent would cause the crude oil to eventually “float” to the surface. In order to determine whether the underground cavern exists, geologists examine seismic data to find the likelihood that an underground cavern exists. Once it is determined that a cavern exists, it is then up to the geologists measure the density or the rocks by sending radio waves into the ground, which are reflected back revealing the density.

While radio waves can be sent from an airplane, another method exists that is more efficient and reliable. For this, geologists utilize seismic waves to construct a three dimensional map of the underground cavern, which is known as three-dimensional seismic imaging.

Scientists, however, must form some estimate about how much oil is located in a reserve. To do this, scientists examine the seismic models and try to determine ten features that the maps cannot tell them. These features include reservoir size, saturation, and porousness. Once the scientists come to their own conclusions, the variables are put into computers. The resulting calculations output several different results, and the average of the results becomes the consensus concerning how much oil is located in a given reserve.