No matter how much traffic a port can handle, a 400,000-ton tanker will grab everyone’s attention, every time. Oil tankers are the largest vessels ever built, and it was not long ago that these massive ships were not sailing on the horizon.

The concept of a liquid carrying tanker is fairly new. The technology for these massive ships was developed in the later part of the 19th century, when tanker building was pushed along by improved technologies like iron hulls, which solved the problem of transporting large quantities of liquid across large bodies of water. In its most general sense, a tanker is a ship built and designed to transport liquids, which vary from bulk amounts of your basic table wine all the way to crude oil and natural gas. Tanker payload all depends on its size, which ranges from sizes smaller than a yacht to sizes bigger than the Navy’s largest aircraft carrier. Smaller tankers can weigh as little as a few hundred pounds, while the world’s largest tankers that span the oceans can weigh hundreds of thousands of tons. 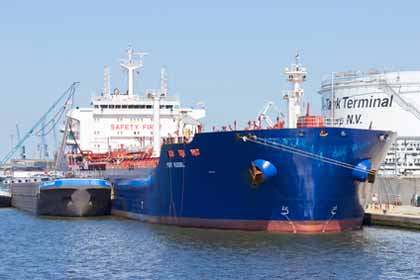 Tankers can carry everything from hydrocarbon, petroleum gas, liquefied natural gas, fresh water, wine, and even chemicals such as ammonia. The amount of cargo that can be carried depends on the size of the tanker. The world’s very largest tankers are classified as Very Large Crude Carrier (VLCC) or Ultra Large Crude Carrier (ULCC) supertankers. A typical VLCC supertanker is around 300 meters long and 50 yards wide, which enables them to carry 200,000 tons or more of oil. The ocean fargin VLCC Vela measures in at 333 meters long and 56 meters wide. Even with this size and a weight of over 300,000 tonnes, it can still reach speeds of 14 miles per hour. Vela can carry so much crude oil that some speculate that it could meet the energy needs of a small city for an entire year. ULCCs can carry over 300,000 tons of crude oil and in total can weigh up to 400,000 tons. The top speed of a fully loaded supertanker can be as high as 18 miles per hour. Learn about working on an oil tanker and other maritime jobs in that section of JobMonkey.

When people think about tankers, they generally imagine petroleum tankers, which is where modern day tankers had their start. Companies were looking for ways to increase their profit margins by finding cheaper ways to transport their product to markets that were outside their current reach. The solution to the problem lie in designing huge ocean faring tankers that could not only carry a huge amount of petroleum, but could also be controlled by a small crew. Although some modern day tankers are longer than the Empire State Building is tall, the world’s largest supertankers are able to be driven by a single person. The reason this is possible is because tankers primarily travel over open ocean where computers and GPS satellite navigation steer the ships, much like an airplane traveling through open air is flown by autopilot. Japanese shipbuilders are even attempting the bold move of building a huge supertanker that will operate unmanned. This tanker would cross the oceans without any crew at all. This technology, however, is not fully developed.