Once the scientists and engineers have located the crude oil it must be removed from the ground and sent to a refinery. The most common way to move the oil from its originating source to a refinery is via pipeline, tanker ship, or barge.

Unless your head has been buried in the sand (with the oil) you know that crude oil is put into barrels (bbls). A barrel of oil is the standard measurement, and each barrel holds 42-U.S. gallons of crude. And each 42-gallon barrel converts to 44 gallons of oil products. slightly more than 44 gallons of petroleum products. When crude goes through processing it actually gets bigger, and thus the increase in volume. 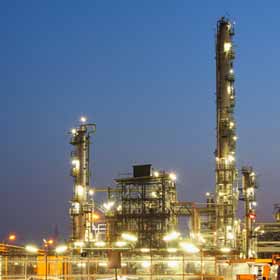 Many of you have probably driven by a refinery or have seen one of these huge ‘factories’ on television or in the newspaper. Refineries turn the valuable crude oil into gasoline and all kinds of other very useful products.

It takes a lot of employees to keep a multi-billion dollar refinery operating around-the-clock, every day of the year! While refineries vary in size, the larger ones may cover many acres. A refinery can occupy as much land as several hundred football fields.

There are several kinds of refineries:

Hydroskimming Refineries are equipped with desulferization and reforming units, topping units, and can increase the octane levels of gasoline and lower the sulfur levels in diesel fuel.

Complex Refineries are the largest and use the most technologically advanced refining equipment and machinery. With the ability to ‘crack’ the heavier oil they can ultimately produce more valuable, lighter petroleum products such as gasoline for cars. Almost 100% of the oil that came in is refinable by a complex refinery.

Refining is a somewhat complicated and technical process. In the simplest terms, this is how oil is refined:

Distillation (or separation). The hydrocarbons in crude oil are distilled in order to separate heavier components, like asphalt, are segregated from light components such as kerosene.

Conversion (or cracking). The molecules in hydrocarbons go through a conversion process (get ‘cracked’) enabling the refinery to produce a higher quantity of the lighter, more valuable petroleum products such as gasoline; and

Treatment (or enhancement). Refineries can improve the petroleum products, such as gas, heating oil, and kerosene, by treating it to remove sulfur. The treatment stage may also entail the addition of blending components to gasoline.